2:44pm: The trade is in place, tweets Fancred’s Jon Heyman.

2:36pm: The D-backs are making a push to acquire left-handed reliever Jake Diekman from the Rangers, reports ESPN’s Jerry Crasnick (via Twitter). A deal between the two sides is close, he adds. 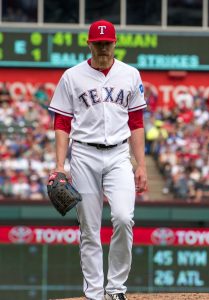 With the Rangers out of contention and Diekman set to hit free agency at the end of the season, he was among their most obvious trade candidates. The 31-year-old, who has generally been a quality reliever since debuting in 2012 with the Phillies, has pitched to a 3.69 ERA/3.36 FIP with 11.08 K/9, 5.31 BB/9 and a 44.9 percent groundball rate this season. Diekman has also generated infield pop-ups at a 12.1 percent rate, which places him above the league average (10.9 percent) for relievers. There are red flags, however, including his aforementioned walk rate and sudden inability to retire same-handed hitters. Lefties have hit .273/.429/.364 this year against Diekman, who has typically fared well against them.

For the Diamondbacks, Diekman represents their second proven bullpen acquisition of deadline day (and he’s only owed the balance of a $2.7125MM salary). The D-backs previously made a trade with the Marlins to reunite with righty Brad Ziegler, who had been in Arizona from 2012-16. Clearly, the bullpen was a concern for general manager Matt Hazen, who has seen the D-backs’ relief unit put up a 24th-place ranking in fWAR despite posting the majors’ second-best ERA (3.07) so far this season. Hazen & Co. will hope these moves help the team retain a playoff spot, as it currently holds a wild-card position and trails the NL-West leading Dodgers by just half a game.

To acquire Diekman, the Diamondbacks gave up 24-year-old right-hander Wei-Chieh Huang, Robert Murray of The Athletic tweets. Huang, a native of Taiwan whom Jim Callis and Jonathan Mayo of MLB.com ranked as the Diamondbacks’ 22nd-best prospect, has worked to a sterling 2.00 ERA/2.78 FIP with 10.67 K/9 and 2.33 BB/9 in 27 innings (10 games, two starts) since receiving a promotion to Double-A earlier this season. Callis and Mayo laud Huang’s mid-90s fastball and offspeed mix (changeup, curve) in their free scouting report.