The Pirates have added some depth to their rotation mix, announcing on Monday that they’ve signed right-hander Jordan Lyles to a one-year contract. The Ballengee Group client will reportedly receive a guaranteed $2.05MM salary. 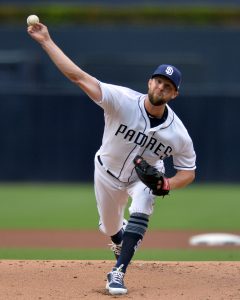 “We are pleased to add Jordan Lyles to our Major League pitching staff,” said GM Neal Huntington in a statement accompanying the announcement. “Jordan has always had a quality pitch arsenal, and given his success after adjusting how he used his pitches during the 2018 season, he will have a legitimate opportunity to earn a spot in our rotation in 2019. We look forward to helping Jordan continue to bridge the gap between potential and performance.”

This move seems to represent a bid to backfill the Bucs’ pitching depth after trading Ivan Nova to the White Sox last week. Lyles likely won’t be promised a rotation spot in Pittsburgh, but he could compete for one in camp and will at least function as a long relief or swingman option. With Huntington saying that the organization is dabbling with the idea of an opener, Lyles could be a particularly interesting fit for the roster.

Lyles turned in a somewhat interesting 2018 season, though his broader track record isn’t all that impressive. The 28-year-old posted a personal-high 10.3% swinging-strike rate this past season, with a modified pitch mix seemingly help to boost that aspect of his game. He won’t turn 29 until next October, so if Lyles turns in a solid season in Pittsburgh, he could elevate his status in advance of a return trip through free agency next winter at a still-desirable age.

That’s not to say the results were universally positive; Lyles didn’t quite turn the corner in an eight-game run as a starter with the Padres. But he was rather effective in a relief role, with a 3.32 ERA over 40 2/3 total innings in 28 appearances. Some kind of multi-inning role other than that of a traditional starter could maximize Lyles’s skill set. At present, the Pittsburgh rotation likely consists of Chris Archer, Jameson Taillon, Trevor Williams, Joe Musgrove and Nick Kingham, though there are alternatives on hand for those final two spots. In addition to Lyles, the Pirates got their first look at Clay Holmes in 2018, and the organization has one of the game’s most promising pitching prospects in the form of right-hander Mitch Keller.