11:41am: The Padres have announced the signing. To make room for Loup on their 40-man roster, they moved Richards to the 60-day injured list.

10:25am: The Padres are set to sign left-handed reliever Aaron Loup, per AJ Cassavell of MLB.com. Loup, a Beverly Hills Sports Council client, will receive a one-year, major league contract with a club option for 2020, Jon Heyman of MLB Network tweets.

The Padres will be the third franchise for the side-arming Loup, who has spent nearly all of his career with the Blue Jays organization since going in the ninth round of the 2009 draft. Loup’s run with Toronto finally came to an end last July when it dealt him to Philadelphia, where he spent upward of a month on the disabled list because of a left forearm strain. The 31-year-old returned toward the end of the season, though, and combined for two frames across five late-September appearances. In all, Loup totaled 39 2/3 innings between the two teams and recorded a 4.54 ERA/3.61 FIP with 9.98 K/9, 3.18 BB/9 and a 49.2 percent groundball rate. 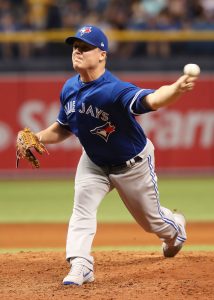 Loup’s just the third major league signing in recent months for the Padres, who have also added second baseman Ian Kinsler and injured starter Garrett Richards on guaranteed deals since last season ended. A far bigger move could be in the offing, but regardless, Loup will join a bullpen that was among the majors’ best in 2018. He’ll also give the Padres a second capable southpaw reliever to join Jose Castillo if fellow lefties Matt Strahm and Robbie Erlin end up in starting roles.