Thursday: Rustin Dodd of The Athletic tweets that Boxberger has passed his physical and officially signed with the Royals.

Wednesday: The Royals are “closing in” on a one-year contract with free-agent righty Brad Boxberger, according to MLB.com’s Jeffrey Flanagan (via Twitter). A client of the Boras Corporation, he’ll receive a $2.2MM guarantee along with $1MM in potential incentives, per Jon Heyman of MLB Network (Twitter links). 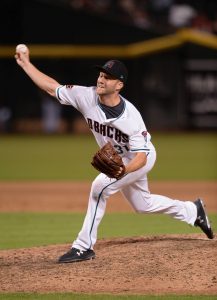 The 30-year-old Boxberger was non-tendered by the Diamondbacks in advance of his final season of arbitration eligibility. He was projected to earn at a $4.9MM rate, owing in no small part to the fact that he racked up 32 saves last year.

As those numbers hint, opposing hitters have generally had a tough time making contact with Boxberger’s four-seam/change combo. On occasion, though, he has trouble inducing them to chase out of the zone and ends up doling out too many free passes. That’s what occurred in 2018, when he walked 32 in 53 1/3 innings and ended up with a 4.39 ERA on the year.

To be fair, Boxberger also racked up 12.0 K/9 in 2018, so he’s still capable of rather elite strikeout numbers. But his fastball velocity dropped below 92 mph for the first time in his career. With more time to react, opposing hitters only offered at 27.6% of the pitches that Boxberger left outside of the zone.

It’s not hard to imagine Boxberger competing for the closer’s job in Kansas City this spring. Wily Peralta took over that role last year, locking up saves in all of his 14 chances, but he doesn’t exactly have a longstanding history of success as a reliever and handed out 23 walks in his 34 1/3 innings on the season.