The Giants and Blue Jays have announced a trade that will send outfielder Kevin Pillar to San Francisco. Heading back to Toronto in return are righty Derek Law, recently designated infielder Alen Hanson, and righty Juan De Paula.

The Giants designated outfielder Michael Reed to create roster space. He joins both Law and Hanson as recent 40-man roster casualties. Law had already been outrighted prior to this move, while Hanson was still in DFA limbo. 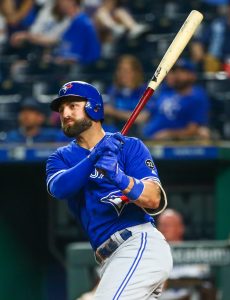 It’s not immediately clear how the Giants will line up in the outfield. Youngster Steven Duggar is likely in line for most of the time in center, but Pillar would offer a platoon match there — the former hits from the left side, the latter from the right — and could also spend time in the corners. He was obviously preferred to the untested Reed, who was added to the mix via late in camp.

Pillar, 30, has some pop but struggles in the on-base department. He’s a lifetime .260/.297/.396 hitter, but has been better (100 wRC+) against left-handed pitching. Pillar’s appeal lies in his glovework and baserunning. While metrics dimmed on his overall defensive work last year, Pillar has a history of outstanding work up the middle and has one of the game’s most impressive highlight reels on the outfield grass. He could end up being moved at the deadline, kept as a one-year fill-in piece, or kept for 2020 via arbitration (his final season of control).

For the Jays, Pillar simply wasn’t part of the long-term plans. This transaction is the latest that clears out roster space and sheds some payroll. The club could have held onto Pillar in hopes that he’d turn in a quality first half and become a mid-season trade chip, but will instead drop his $5.8MM salary and open the door for Anthony Alford to get a shot at the majors.

The Toronto organization does pick up a few potentially helpful roster assets in Law and Hanson. The former had a nice 2016 debut but has struggled since. Law will be available as a depth relief piece if a need arises. Hanson, 26, was a major contributor least year in San Francisco but faded down the stretch. He could take up a utility role, though the Jays have several such players on the roster already.

But the only player with notable potential future value is De Paula, a 21-year-old who has had some success in the minors. He reached the Class A level last year, making one start there. Over 233 innings in parts of four seasons in the low minors, he carries a 2.47 ERA with 8.8 K/9 and 3.0 BB/9.

De Paula originally came to the Giants last year in the swap that sent Andrew McCutchen to the Yankees. As JJ Cooper of Baseball America notes on Twitter, he has now been swapped three times already in his still-nascent career.