The Angels are set to promote corner infield prospect Matt Thaiss for his MLB debut. Halos Prospects first reported on Twitter that Thaiss was “expected” to be called up today, and Jeff Fletcher of the Orange County Register tweets that Thaiss is indeed getting the call. Corresponding moves aren’t yet clear, though Tommy La Stella did sustain a painful-looking leg injury last night upon fouling a ball into his shin and has since been replaced on the All-Star roster. Brian Goodwin also exited last night’s game after being hit by a pitch. 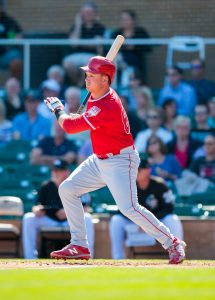 Thaiss, 24, was the Angels’ top pick (No. 16 overall) back in 2016. A catcher at the University of Virginia, Thaiss was widely expected to move to first base in pro ball but was a first-round pick all the same due to his offensive upside. While he has indeed moved out from behind the plate, he’s spent considerably more time at third base than at first base so far in 2019. At the plate, Thaiss is enjoying a solid .274/.390/.477 slash with 14 home runs, 17 doubles and two triples in 372 plate appearances. Long touted for his terrific plate discipline, Thaiss has walked at 15.9 percent clip against a 17.2 percent strikeout rate.

Entering the season, MLB.com ranked Thaiss sixth among Angels prospects and ninth among all first base prospects in baseball. Fangraphs tabbed him as the Halos’ No. 9 prospect, praising a swing change in 2018 that finally allowed Thaiss to tap into some in-game power. He doesn’t have off-the-charts power, drawing more average scouting marks in that regard. Combined with his strong on-base skills, an ability to work counts, passable defense at first base and his recent exposure at the hot corner, that could be enough to make Thaiss a solid contributor for the foreseeable future.