The Braves and Giants have struck an intriguing pact that’ll send veteran reliever Mark Melancon to Atlanta, according to Jeff Passan and Buster Olney of ESPN.com (via Twitter). Righties Tristan Beck and Dan Winkler are going to the Giants in the deal, Robert Murray of The Athletic tweets. Melancon has full no-trade rights, but consented to the swap. 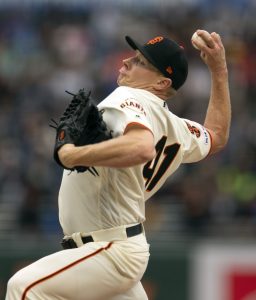 Melancon is owed a hefty $14MM this year and next. Rather surprisingly, the Braves are taking on all the remaining salary owed Melancon, according to Henry Schulman of the San Francisco Chronicle (Twitter link).

Melancon originally joined the San Francisco organization on a four-year, $62MM pact in advance of the 2017 campaign. That contract really hasn’t worked out for the Giants, as Melancon has dealt with injuries and hasn’t been nearly as effective as he was heading into free agency.

That said, he has been a solid pen piece over the past two years. Through 85 1/3 innings since the start of 2018, he carries a 3.38 ERA with 7.9 K/9 and 3.2 BB/9. Importantly, Melancon has held opposing hitters to just five home runs in that span; whether that suppression can be maintained will tell on his future. He owns a monster 61.4% groundball rate this year.

With Melancon and Shane Greene joining the Atlanta relief unit, the club is obviously betting on worm-burners over strikeouts. Both have ample experience closing out games, but neither really profiles as a high-end game finisher for a prime contender. Just how the late innings will be handled remains to be seen.

In Beck, the Giants get a young hurler who has shown a bit of swing-and-miss potential. It’s still early in the developmental process, but the 23-year-old has reached the High-A level already. In eight starts there this year, he carries a 5.65 ERA with 9.6 K/9 and 3.4 BB/9.

Meanwhile, the San Francisco club will see if it can help Winkler rediscovery the form he showed over the prior two seasons, when he emerged as a quality reliever after battling through a litany of injuries. The 29-year-old has stumbled to a 4.98 ERA and allowed five long balls in 21 2/3 frames this year, enduring drops in his strikeout and walk rates (9.1 and 4.6 per nine, respectively) but boosting his swinging-strike rate to 14.8%. Winkler struggled all the more at Triple-A, walking 18 to go with twenty punch-outs in 16 2/3 innings.