3:33pm: Southpaw Tony Cingrani is heading to St. Louis, likely for salary relief (as he’s out for the year), along with righty Jeffry Abreu. The Dodgers also obtain international spending capacity and cash considerations in unannounced amounts.

2:15pm: The Dodgers have struck a deal to add infielder Jedd Gyorko from the Cardinals, according to Ken Rosenthal of The Athletic (via Twitter). The return isn’t yet known. 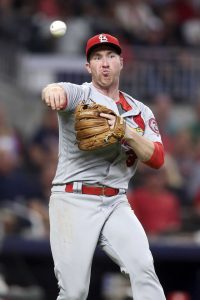 Gyorko, 30, is playing on a $13MM salary this year ($5MM of which is still property of the Padres) and comes with a $13MM option ($1MM buyout) for next season. It’s not clear whether the Dodgers will be stepping into the full obligation.

Though he’s currently on the injured list, Gyorko is expected back in relatively short order. He’s on the 60-day injured list at present, which means the Dodgers don’t have to open a 40-man roster spot for him.

The Dodgers certainly have a wide array of players that fit Gyorko’s general description as a multi-positional player with a nice track record at the plate. But several of those players are currently dealing with injury issues, so the L.A. brass obviously decided to snag another.

Gyorko will be looking for a bounce back when he arrives with his new team. He hasn’t seen much action this year but has struggled when he has been available. But he was a consistent hitter over the prior three seasons in St. Louis, carrying a cumulative .259/.331/.463 batting line with 61 total long balls.