The Athletics will promote left-hander A.J. Puk from Triple-A Las Vegas prior to tomorrow’s game, Martin Gallegos of MLB.com reports (via Twitter). Puk, the No. 6 overall pick in the 2016 draft, will need to have his contract formally selected. Oakland has an opening on its 40-man roster to accommodate him. 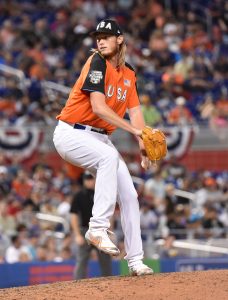 Puk, 24, is considered by virtually every major prospect outlet to be among the game’s top 50 prospects. He’s viewed as a potential key piece to the Athletics’ rotation down the road, but he’s been working primarily in relief this season as he works back from 2018 Tommy John surgery. The towering 6’7″ southpaw has a lackluster 4.97 ERA in 25 1/3 minor league innings this season, but he’s also punched out 38 hitters against 10 walks in that time.

Fangraphs currently rates Puk as baseball’s No. 21 prospect, putting a 65 grade on his fastball, a 60 on his slider and giving him the potential for two more average or better offerings in his changeup and curveball. MLB.com lists Puk 43rd among MLB prospects and dropped a 70 grade on his heater with a 65 on his slider. Puk, who paced all minor league starters with 13.2 K/9 in his last full season back in 2017, is touted as a potential No. 2 starter at the Major League level. He’ll likely get the opportunity to make good on those bullish forecasts in 2020, alongside the likes of Sean Manaea, Frankie Montas and perhaps fellow ballyhooed left-hander Jesus Luzardo, but for now he’ll step into Bob Melvin’s bullpen and look to help shut things down in the late innings.

Oakland has three left-handers in the ’pen at the moment, with Jake Diekman, Wei-Chung Wang and Ryan Buchter all giving Melvin southpaw options. All three of those southpaws have had issues with commanding the strike zone, though, and none can match Puk’s overall ceiling as a game-changing relief weapon. Taking a broader look, Oakland has seen closer Blake Treinen follow up a dominant 2018 campaign with a dismal 2019 showing. Fellow righty Lou Trivino has taken similar steps backward, leaving the A’s with a bullpen that’s been weaker than they anticipated.

By promoting Puk now, the A’s will be positioning themselves to control him through 2025 season, although future optional assignments to the minors could yet impact that timeline. If he’s in the big leagues from Tuesday through season’s end, he’ll accrue 41 days of big league service, though, meaning in order to push his path to free agency back until the 2026-27 offseason, the A’s would need to keep him in Triple-A for nearly two months next season. In other words, this appears quite likely to be a chance for Puk to cement himself as a big leaguer and leave the minor leagues behind. If he is indeed in the Majors for good, he wouldn’t be eligible for arbitration until after the 2022 season.