Sept. 22: Mattingly’s new contract comes with a rather significant pay cut, reports Ken Rosenthal of the Athletic. While Mattingly’s previous deal came with a $2.8MM salary for 2019, this pact is believed to pay him $2MM or less annually. The Marlins declined to formally announce the terms.

Sept. 20: The Marlins have formally announced the extension. It’s a two-year deal with a mutual option for the 2022 season.

8:38pm: The Marlins and manager Don Mattingly have agreed on a contract extension, as per Daniel Alvarez-Montes of El Extrabase (Twitter link).  The deal will be officially announced tomorrow at a press conference.

Mattingly’s four-year contract was set to expire after the season, and there had been a great deal of speculation that the skipper’s time in Miami was coming to a close.  Mattingly was a holdover from Jeffrey Loria’s ownership, and new CEO Derek Jeter said just last month that upper management hadn’t yet made a decision about whether or not to retain Mattingly beyond the 2019 campaign. 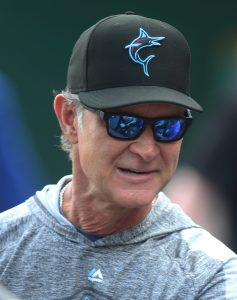 While Jeter and company have largely cleaned house within the Marlins’ organization since Bruce Sherman’s ownership group bought the team in 2017, some key personnel have been retained, most notably Mattingly and president of baseball operations Michael Hill.  Their contracts could have played a role (Hill is also under a long-term deal that runs through 2020), though the fact that Mattingly is now staying is certainly acknowledgement that Jeter’s regime isn’t entirely doing away with holdovers from the Loria days.

Indeed, it’s hard to blame Mattingly for the 272-364 record he carries as the Marlins’ manager.  A respectable 79-82 campaign in 2016 was marred by the tragic death of Jose Fernandez near the end of the season, 2017 was a 77-85 writeoff dominated by the impending team sale and rumors of yet another fire sale of the Marlins’ top players, and the miserable 116-197 record of the last two seasons have borne the results of that fire sale.  The Fish are on pace to crack the 100-loss threshold for the third time in franchise history.

Somewhat surprisingly, Mattingly’s 636 games in the dugout already make him the longest-serving manager the Marlins have ever had, which speaks to the tumult this organization has more or less faced since day one.  Mattingly’s retention will provide some sense of stability as the Marlins put together a new core group of young talent in their latest rebuild.

One of the game’s biggest stars of the 1980’s during his playing days with the Yankees, the 58-year-old Mattingly is about to complete his ninth year as a manager.  Miami’s struggles brought Mattingly’s career managerial record (718-727) under the .500 mark, as he enjoyed five years of winning baseball with the Dodgers from 2011-15 that included three NL West titles.