2:14pm: The Mariners have announced the signing. Their 40-man roster is now up to 38 players. 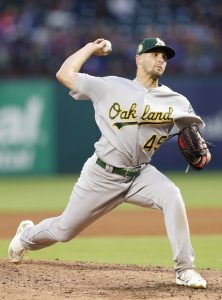 As we explored last month, Graveman worked hard to put himself back on the map after returning from Tommy John surgery. While the Cubs ultimately decided not to hang onto the hurler for a $3MM price tag, the M’s obviously saw enough to bring him in for a lesser guarantee — while also picking up an affordable option if things go well.

There’s also a provision to allow some extra earning power for Graveman, a client of Sports One Athlete Management. He’ll have the ability to earn up to $1.5MM in incentives for each year of the contract (assuming that he’s picked up for 2021). It’s not yet known how readily achievable those extra dollars are.

Seattle makes for a perfect landing spot for the 28-year-old hurler, who was able to return to the mound — but not the majors — during the 2019 season. He’ll likely have the inside track on a rotation spot, with the backstop of serving as a swingman out of the pen.

Graveman was a productive starter with the Athletics for a solid stretch earlier in his career. Up until the roadblock he hit in 2018, the Mississippi State product had dialed up 411 2/3 innings of 4.11 ERA ball. While he never was and surely never will punch out many hitters, Graveman boasts a strong 51.7% groundball rate for his career.

Though he was not able to make it back to the majors last year, Graveman made it into competitive action in the minors. That gave the Mariners a chance to get a look at his form. And it should leave full confidence that Graveman will be a full participant in Spring Training from the outset.