JAN. 22: The Angels have announced the move.

JAN. 19: The Angels have an agreement with free-agent left-hander Jose Quintana, pending a physical, Ken Rosenthal of The Athletic reports. It’s a one-year, $8MM contract for the Wasserman client, per Tim Brown of Yahoo Sports. 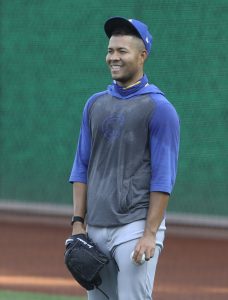 Quintana was one of the most accomplished innings eaters available in free agency, as the 31-year-old has thrown 1,495 frames of 3.73 ERA/3.99 SIERA ball between the White Sox and Cubs since his career began in 2012. Of course, a good portion of Quintana’s career has been spent with Angels manager Joe Maddon, who was the Cubs’ skipper when the southpaw pitched for the club from 2017-19. Maddon was with the Angels last season, when Quintana missed most of the year with thumb problems. He totaled just one start and 10 innings in his final season in Chicago.

Last year’s injury issues look like an anomaly for Quintana, who entered the season with seven straight campaigns of 170-plus innings. That’s the type of durability the Angels have lacked in recent years. They’ve battled a litany of injuries in their rotation en route to six straight seasons without a playoff berth, but a healthy Quintana may help turn their fortunes around in 2021.

Along with Quintana, the Angels are set to feature Dylan Bundy, Andrew Heaney and Griffin Canning in the top four of their rotation next season. Two-way player Shohei Ohtani and Jaime Barria also figure to collect plenty of starts for the club, though new general manager Perry Minasian might not be done addressing that part of the Angels’ roster.