The Pirates have made a late addition to their rotation mix, announcing Friday that they’ve signed veteran righty Trevor Cahill to a one-year deal.  The JBA Sports client will reportedly be guaranteed $1.5MM and have the opportunity to take home another $1MM via incentives.  Those incentives are based on innings pitched and kick in with a $100K bonus for reaching 75 frames. Cahill would also earn $150K for reaching 100 innings, $200K at 125 innings, $250K at 150 innings and $300K at 175 innings. 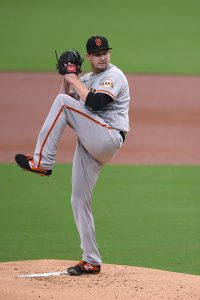 Cahill received interest from as many 16 teams, Nightengale writes, following a season that saw him post a 3.24 ERA/4.38 SIERA over 25 innings with the Giants.  Presumably, based on the terms of his contract, much of that interest was on non-guaranteed deals.

Long a ground-ball specialist, Cahill seemed to change course in 2020, albeit with the caveat of his very small sample size of work.  Cahill had only a career-low 33.3% grounder rate, while his K% rocketed to 29.2%, by far the highest of his 12-year career.  His Statcast metrics were solid overall, and Cahill continued to deliver his signature elite-level curveball spin.

The 33-year-old Cahill worked as both a starter and reliever in San Francisco, and it seems likely that he’ll be ticketed for rotation work in Pittsburgh.  Certainly, his incentive structure is geared toward that role.  With Jameson Taillon, Joe Musgrove, Trevor Williams, and Chris Archer all now pitching for other teams, the Pirates have definitely need for some innings-eating arms in the rotation.

Cahill joins fellow newcomer Tyler Anderson alongside Mitch Keller, Chad Kuhl, and Steven Brault as the top rotation candidates in Pittsburgh, though this collection could change significantly as the season goes along — whether just by simple attrition, other youngsters stepping up to grab jobs, or the rebuilding Pirates trading more hurlers elsewhere.