The Mariners will promote standout pitching prospect Logan Gilbert, according to Jeff Passan of ESPN. Gilbert will start their game against the Indians on Thursday, Ryan Divish of the Seattle Times tweets. 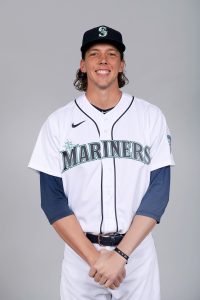 This is the second major promotion coming this week for Seattle, which is also set to call up elite outfield prospect Jarred Kelenic prior to Thursday’s contest. The Mariners and their fans will get their first major league looks at two players they hope will be part of the solution in Seattle for the long haul.

Like Kelenic, Gilbert was part of the first-round class of 2018. The Mariners took the right-hander 14th overall out of Stetson University, where Cy Young winners Jacob deGrom and Corey Kluber attended. And though Gilbert didn’t pitch professionally that season because of mononucleosis, he has since dominated minor league competition. Gilbert combined for 135 innings among the Single-A, High-A and Double-A levels in 2019, when he recorded a sterling 2.13 ERA with 165 strikeouts against 33 walks. There was no minor league campaign in 2020, which prevented Gilbert from pitching in a real game, but he threw five innings of four-hit, one-run ball with five strikeouts and no walks in his Triple-A debut this year.

Thanks in part to the excellence he has shown at lower levels, Gilbert ranks as one of the sport’s premier pitching prospects. MLB.com places Gilbert No. 28 on its top 100 list and writes that his impressive four-pitch repertoire – a fastball, slider, curve and changeup – could help him turn into a No. 2 starter in the majors. Baseball America joins MLB.com in ranking Gilbert 28th, while FanGraphs (No. 37), ESPN (No. 43) and The Athletic (No. 47) also regard him as a top-end prospect.

Gilbert will now join a starting rotation that has received mixed results this year. Yusei Kikuchi, Chris Flexen and Justin Dunn have fared reasonably well over a combined 18 starts. On the other hand, the M’s only other hurlers with three or more starts – Marco Gonzales, Justus Sheffield and Nick Margevicius – haven’t performed as hoped. Gonzales and Margevicius have been out since late April with injuries.

If Gilbert takes hold of a rotation spot and stays up for good, the Mariners will be able to control him through 2027. He’s also slated for Super Two status, meaning he’ll go through arbitration four times.