The Reds and manager David Bell have agreed on a contract extension that runs through the end of the 2023 season, Bell himself told reporters (including Mark Sheldon of MLB.com). Bell anticipates his entire coaching staff will return next season as well. 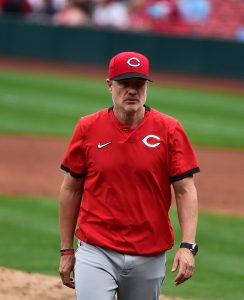 Bell has led the Cincinnati dugout for the past three seasons, with the team posting a cumulative 184-190 record (.492 winning percentage). Before landing his first managerial gig, he’d worked in a few different capacities, serving on Mike Matheny’s coaching staff with the Cardinals for five years before spending a season as the Giants’ vice president of player development.

The Reds hired Bell in October 2018, signing him to a three-year guarantee. That deal contained a club option for the 2022 season. Rather than exercise the option and potentially enter next season with Bell in a lame duck capacity, Cincinnati struck early to guarantee Bell’s position for another two years. It’s not clear whether his new deal also contains options beyond 2023.

At the time of Bell’s initial hiring, the Reds were still amidst a multi-year rebuild. They’d posted below-average records in each of the five prior seasons, finishing last in the NL Central every year from 2015-18. The club dismissed skipper Bryan Price early in 2018, with Jim Riggleman taking the reigns on an interim capacity for the remainder of the year.

The team made some progress in Bell’s first year at the helm. After winning between 64 and 68 games in each of the prior four seasons, the Reds went 75-87 in 2019, surpassing the Pirates to get out of the basement of the division. They flipped the switch completely into win-now mode late in the year, acquiring Trevor Bauer at the trade deadline with an eye towards 2020 and pushing payroll to a franchise-record height that winter. The front office signed Mike Moustakas and Nick Castellanos to matching $64MM guarantees and also added Shogo Akiyama and Wade Miley on multi-year deals.

The organization clearly envisioned 2020 as the opening of a new competitive window. Obviously, the pandemic-necessitated shortened season threw a wrench in those plans, but the Reds did at least finish 31-29 last year to earn a spot in the expanded playoff. That snapped a six-year postseason drought, but Cincinnati was quickly dispatched by the Braves in the Wild Card round. The club then had a relatively inactive offseason, entering this year with a significant question mark at shortstop and some concerns about the relief corps.

Those issues impacted the club’s early-season play, particularly as Eugenio Suárez struggled badly in an attempt to move from third base to shortstop. Cincinnati hovered right around .500 through the season’s first half before catching fire coming out of the All-Star Break. Not too long ago, they looked as likely as anyone to claim the NL’s second Wild Card spot, but the club has stumbled to a 7-12 record in September. Coupled with the Cardinals’ recent surge, Cincinnati now sits four games back of St. Louis for the final playoff spot. According to FanGraphs, their postseason odds are down to 5.9%.

Missing the playoffs would certainly be a disappointing outcome for a Cincinnati club that expected to contend this season. GM Nick Krall and the front office nevertheless believe in Bell’s ability to lead the club back to the playoffs over the coming years. Despite their up-and-down play this season, the Reds have seen homegrown, controllable players like Jesse Winker, Jonathan India and Tyler Stephenson emerge as above-average regulars during Bell’s tenure. That trio will work with the resurgent Joey Votto and a talented pitching staff led by Luis Castillo, Sonny Gray and Tyler Mahle to form what the club hopes to be a competitive core in 2022 and beyond.