The Braves announced Monday that they’ve signed veteran catcher Manny Pina to a two-year contract worth $8MM. (Atlanta is one of the few organizations that publicly discloses financial terms.) Pina will earn $3.5MM in 2022 and $4.5MM in 2023. The contract also has a $4MM club option for the 2024 season, which does not come with a buyout. Pina is a client of Rep 1 Baseball. 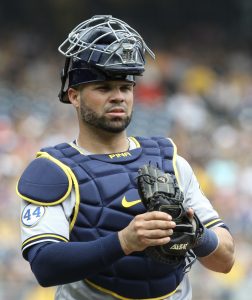 It’s at least a moderate surprise to see Atlanta ink another catcher. The Braves already extended veteran Travis d’Arnaud on a two-year, $16MM contract late in the season, giving them a veteran option to provide a bridge to up-and-coming prospects William Contreras and Shea Langeliers. With Pina now on board, both Contreras and Langeliers have veteran roadblocks in their way on the big league roster.

Langeliers, who has just five games of Triple-A ball under his belt, likely wouldn’t have been an option until late in the 2022 season at the very earliest anyhow, but Contreras has already gotten his feet wet in the Major Leagues and seemed to be a candidate to break camp with the team behind d’Arnaud next year. The addition of Pina, on a two-year deal no less, makes that alignment unlikely anytime in the near future — unless the Braves opt to carry three catchers on the roster (which seems possible with the likely addition of a designated hitter in the National League). The added organizational depth, however, protects the Braves in the event of another injury to d’Arnaud and also frees the front office to at least be more open to trade scenarios involving their young backstops this winter.

In Pina, Atlanta is adding a well-regarded defensive catcher who has some pop in his bat but struggled to hit for average this past season, albeit due to a fluky low .162 average on balls in play. The 34-year-old Pina (35 next June) hit .189/.293/.439 with a career-high 13 home runs in 208 plate appearances this past season. Since establishing himself as the backup catcher with the Brewers back in 2016, he’s given Milwaukee 1209 plate appearances of .245/.314/.415 offense.

With the glove, Pina has been credited with a whopping 38 Defensive Runs Saved through just 2407 innings over the six-year run with the Brew Crew. He consistently draws plus framing marks and boasts a massive 35% caught-stealing rate, which is well north of the league average of 28% over the course of his MLB career.

Pina’s $3.5MM salary next season brings the Braves to $80.5MM in guaranteed contracts to seven players, plus a projected slate of $49.9MM in arbitration salaries, per MLBTR contributor Matt Swartz. Of course, that number doesn’t include franchise icon Freddie Freeman, who has been extended an $18.4MM qualifying offer he’s sure to reject. Freeman is a free agent for the first time in his illustrious career, but the Braves figure to make a strong push to retain him even after he fields interest from other clubs around the league.

This past season’s $131.4MM Opening Day payroll was a franchise record, but president of baseball operations Alex Anthopoulos has already indicated that ownership will increase that figure for the 2022 season.