2:01pm: The Rockies have formally announced the extension.

11:22am: The Rockies have signed manager Bud Black to a one-year contract extension, reports Patrick Saunders of the Denver Post. Black had previously been set to enter the final year of his deal, but he’s now signed through the conclusion of the 2023 campaign. 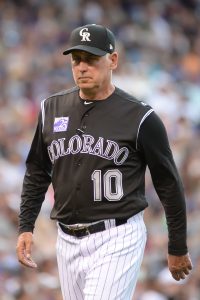 The 2022 season will be Black’s sixth with the Rockies and 15th managing at the big league level. The 2010 National League Manager of the Year in San Diego, Black was hired by now-former general manager Jeff Bridich heading into the 2017 season. His first two years on the job resulted in Wild Card berths, with Black’s Rockies going 1-1 in those one-game postseason showdowns. The division-rival D-backs toppled Colorado in 2017, but Black and the Rockies took down the Cubs in 2018 — albeit before falling to the Brewers in a three-game NLDS sweep.

Since their last postseason appearance, the Rockies have posted three straight losing seasons. With a 171-212 record in that time (.446 winning percentage) and a change at the top of the baseball operations staff, there’d been at least some speculation as to whether Black would remain with the Rockies beyond the current season. Owner Dick Monfort is generally regarded as one of the most loyal executives in the sport (often to a fault), and new GM Bill Schmidt was a prominent figure in the front office even at the time of Black’s original hiring by Bridich and Monfort. In spite of the losing ways in recent year, it appears Black will receive the opportunity to turn the ship around.

Frankly, that’s a defensible stance for the Rockies to take. Black’s rosters haven’t exactly been set up for success, after all, as the Rockies didn’t spend anything in free agency in either of the past two offseasons. Perhaps Monfort and the front office were still reeling from an ill-fated series of free-agent foibles that saw Ian Desmond, Wade Davis, Bryan Shaw and Jake McGee sign for a combined $176MM with very little in terms of a return on investment. Perhaps Monfort truly believed that the 2020-21 Rockies were capable of producing 90-plus wins as constructed and needed little to no augmentation, as he previously implied.

Beyond the lack of roster upgrades, of course, was the organizational turmoil that eventually led to Nolan Arenado’s departure. Signed to an extension that ostensibly set him up as the face of the franchise moving forward, Arenado quickly grew frustrated with the front office’s lack of additional moves. Rockies brass had reportedly promised that his contract would be the first in a series of moves aimed at putting a perennial contender on the field, but the team instead repeatedly stood pat. A rift between Arenado and the front office/ownership grew, with Arenado famously going on record to state that he felt “disrespected” by the Rockies — Bridich in particular.

Whatever the reasoning, the lack of upgrades and the eventual trade of their clear best player makes it difficult to have set much in the way of expectations for Black. Managers are evaluated on far more than their wins and losses in today’s age of aggressive tanking and rebuilds anyhow, and there’s no indication Black has ever lost his grip on the clubhouse. He’s also known as a manager who specializes in helping young pitchers — Black himself is a former Major League pitcher — and Monfort and Schmidt surely have to be pleased with the manner in which Colorado’s rotation performed in 2021.

Coors Field will always prove problematic for the home pitching staff, but the Rockies’ rotation was generally durable and dependable. The quintet of Jon Gray, German Marquez, Kyle Freeland, Antonio Senzatela and Austin Gomber combined to start 135 of the Rockies’ games (83.3%), and each posted an ERA in the mid-4.00s with an average or better ground-ball rate. The Rockies weren’t necessarily a powerhouse rotation, but for a team that often ranks at the bottom of the league in terms of pitching performance, it was encouraging to get such volume and fairly consistent results from the top five arms.

The Rockies face an uphill battle if they hope to return to contending in a deep NL West that is currently headed up by the No. 1 and No. 2 win totals in all of baseball from 2021 (Giants and Dodgers). The Padres remain squarely in win-now mode as well, and the Rockies will be tasked with improving the club despite a bottom-tier farm system and the likely loss of two more top players (the aforementioned Gray and shortstop Trevor Story). Whether they have a Cinderella run in them can’t be known, but Black will now have another pair of chances to coax that out of this group.