7:09pm: The team has officially announced the extension.

4;53pm: The Dodgers and manager Dave Roberts have agreed to a three-year extension, reports Jon Heyman of the MLB Network (Twitter link). He is now under contract through 2025.

This has seemed like an inevitability for some time. Reports emerged during the lockout that the team and skipper were motivated to get a new deal done before the start of the regular season. Roberts had been headed into the final year of his contract, and teams can be hesitant to avoid entering the season with a manager in a lame-duck situation. 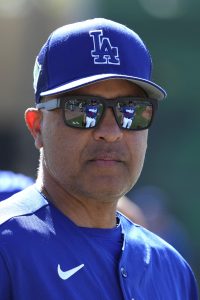 That’s not to say Roberts’ job ever looked to be in jeopardy, even before news of extension negotiations was made public. Los Angeles hired the former 10-year MLB veteran to replace Don Mattingly over the 2015-16 offseason. It was Roberts’ first managerial gig, perhaps a risky proposition for a team that had won the NL West in each of the previous three seasons under Mattingly.

Despite his lack of experience, Roberts has guided Los Angeles’ consistently talented rosters to plenty of success. They won the division in each of his first five seasons at the helm, getting past the Division Series in three of those years. The Dodgers won back-to-back pennants between 2017-18 but dropped successive World Series against the Astros and Red Sox, respectively.

Like any manager, Roberts came under some fire from the fanbase for some of his pitching decisions in the postseason. Throughout his tenure, though, the front office maintained confidence in both his leadership of the clubhouse and his bullpen management when the lights were brightest. Dodgers brass clearly never believed Roberts’ postseason management was fatal to their chances of winning a title, and they were proven right in 2020. After an incredible 43-17 record in the shortened regular season, the Dodgers stormed through the postseason to claim their first World Series since 1988. That was in spite of that year’s unique playoff format, which required all teams to advance through four rounds (instead of the customary three) thanks to an expanded field.

The stretch of division championships came to an end last year, although that wasn’t a reflection of any lack of team success. The 106-win Dodgers were narrowly edged out by a 107-win campaign from their archrivals in San Francisco. Nevertheless, they took down the Cardinals in the final NL Wild Card Game, then beat the Giants in the NLDS. Los Angeles lost to the Braves in the NLCS, but it marked another season as one of the league’s most successful teams overall.

Los Angeles has made the playoffs in all six seasons of Roberts’ tenure, the only team in MLB to do so. They’re 542-329 in regular season play in that time, winning more than 57% of their games. Roberts has certainly had the fortune of overseeing one of baseball’s most talented clubs on an annual basis, but there’s little questioning the organization’s run of success. The front office and ownership seem happy with his work behind-the-scenes, and he’s now slated to stick atop the dugout through 2025.

If Roberts remains Dodgers’ manager through the term of his new deal, he’ll reach a full decade in the position. Only three skippers — Hall of Famers Walter Alston, Tommy Lasorda and Wilbert Robinson — have reached the ten-year milestone in franchise history. That trio and another Hall of Famer, Leo Durocher, are the only skippers to lead the Dodgers to more wins than Roberts has in the past six years.