March 20: The Phillies have announced the signing, placing Kent Emanuel on the 60-day IL as a corresponding move. Emanuel went on the IL in June of last year with left elbow while with the Astros and never returned. Claimed by the Phillies in November, it seems he’s not close to being recovered, as the Phils announced that he has a left elbow impingement.

8:54am: Schwarber and the Phillies have agreed to a four-year deal with an annual value just shy of $20MM, tweets Jayson Stark of The Athletic.

8:31am: The Phillies have reached an agreement with Schwarber, pending a physical, tweets Jim Salisbury of NBC Sports Philadelphia.

8:21am: The Phillies are “making progress” on a deal with free-agent slugger Kyle Schwarber, reports Ken Rosenthal of The Athletic. Schwarber had recently been linked to the Blue Jays, but Shi Davidi and Hazel Mae of Sportsnet reported a few minutes ago that the team had become “pessimistic” about its chances of signing Schwarber, believing he was likely to sign elsewhere. 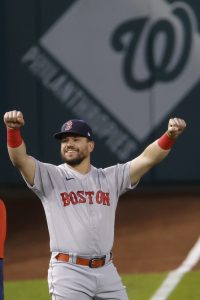 Schwarber, 29, has been one of the most sought-after free agents on the market in the days since MLB’s lockout was lifted — thanks in no small part to the implementation of the universal designated hitter. The longtime Cubs left fielder was non-tendered by Chicago after the 2020 season but parlayed a one-year deal with the Nationals (and a subsequent trade to the Red Sox) into a surefire multi-year deal in his second foray into free agency.

While Schwarber got out to a lukewarm start with the Nats in 2021, he erupted with one of the most prodigious hot streaks in big league history in mid-June. From June 12-29, a span of just 18 games, Schwarber launched a staggering 16 home runs through just 77 plate appearances. That astonishing run was cut short by a hamstring strain that sidelined him for more than a month, but the Red Sox had no qualms about trading for Schwarber even while he was on the injured list.

The Boston front office was surely glad it did so, as Schwarber returned with that same thunder the moment he was activated from the injured list. In 168 plate appearances with the Red Sox down the stretch, he turned in a huge .291/.435/.522 slash with seven homers and 10 doubles as the Red Sox surged to an AL East division title. Schwarber clocked three more home runs during the postseason, including a now-iconic grand slam that keyed a Game 3 ALCS romp over the Astros, but his bat fell quiet thereafter, as he finished out the series in an 0-for-15 funk while the ’Stros came back to topple the Sox.

Signing with the Phillies will reunite Schwarber with former Nationals hitting coach Kevin Long, who left the Nats’ staff at season’s end and signed on for a reunion with manager Joe Girardi, under whom he’d previously coached with the Yankees. Long’s presence certainly couldn’t have hurt the Phillies’ efforts to sign Schwarber, and it’s of some note that he’ll now continue working with the same hitting coach who helped coax that career-altering run from him during the ’21 season.

Schwarber’s role with the Phillies depends, to an extent, on the remainder of the team’s moves. While he’ll probably spend some time in left field and at designated hitter regardless, the division of his workload between those two spots hinges on whether the Phils make another clear upgrade in the outfield. At the moment, the Phillies don’t have a clear, everyday option in left field. Bryce Harper is, of course, locked into right field, but the rest of the outfield remains in a state of flux. The Phils brought Odubel Herrera back on a one-year, $1.75MM deal, and he’s joined by Adam Haseley, Mickey Moniak and Luke Williams as outfield options on the roster. Suffice it to say, at least one more newly acquired bat seems likely to join Schwarber in the Opening Day lineup by the time all is said and done.

The scope of any further additions seems likely to be driven by the luxury tax. Phillies owner John Middleton has staunchly resisted exceeding the tax line in the past two seasons, and today’s addition of Schwarber will push the Phils to roughly $216-217MM in luxury obligations, depending on the specifics (hat tip to Roster Resource’s Jason Martinez). That’ll leave the Phils with somewhere in the vicinity of $13-14MM of breathing room to add at least one more outfielder and any other supplemental pieces the front office desires. Teams generally want to leave at least a few million dollars for in-season dealings, so it could be that president of baseball operations Dave Dombrowski is dealing with a bit less than that projected $13-14MM.

Of course, additional trades or a simple change of heart with regard to Middleton’s luxury-tax aversion could change the calculus. Dombrowski made clear early in the offseason that shortstop Didi Gregorius would have to earn a starting job after a dismal showing in 2021, and he’s been listed as a speculative candidate to be moved in a change-of-scenery swap. The Phils could also try to dump the contract of outrighted utilityman Scott Kingery on another club as well, which would free up another $4MM in luxury space.

Barring any such trades or philosophical changes in ownership thinking, Dombrowski will be working with some notable financial limitations from here on out. That might mean a shift to the trade market or pursuing some smaller-scale free agents in hopes of securing a bargain. Time will tell just how the front office will proceed, but the addition of Schwarber to a lineup that ranked 15th in the Majors in home runs and 13th in runs scored will provide a notable jolt in production.