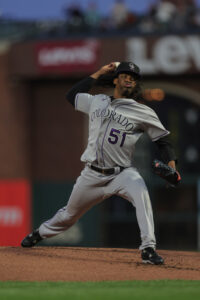 Ureña, 31, is a veteran who has appeared in each of the past eight MLB seasons. The first six of those were with the Marlins and the seventh was with the Tigers, with the righty generally soaking up innings by inducing a fair amount of ground balls. In 2022, he began the year with the Brewers but was let go in May after just four relief appearances. He latched on with the Rockies on a minor league deal and made it up to their big league team by July. He eventually made 17 starts for Colorado and continued in his usual low-strikeout, high-grounder fashion. He logged 89 1/3 innings with a 5.14 ERA, 15.2% strikeout rate, 9.6% walk rate and 50.3% ground ball rate, with all of those being pretty close to his career marks.

Since Coors Field is notorious for its offense-forward environment, Ureña was likely better than that ERA indicates. All of the advanced metrics were a bit kinder, as he had a 4.53 FIP, 4.46 xFIP and 4.83 SIERA. Those still aren’t amazing numbers, but the Rockies often have trouble convincing pitchers to make Denver their home. As the season was winding down, reports emerged that both he and the club were happy with their arrangement and were interested in a reunion. Giving the mutual affection and constant need for arms in Colorado, signing up for another year at a modest price point seems to be a good fit for all parties.

By bringing back Ureña, the club adds a reliable veteran to a rotation that has a lot of uncertainty at the moment. Germán Márquez and Kyle Freeland should have two spots spoken for, with Ureña now taking a third. There’s not much guaranteed beyond that right now though. Antonio Senzatela should enter the mix at some point, though he was diagnosed with a torn ACL in August. At the time, the estimated recovery period was given as 6-8 months, meaning Senzatela could miss a chunk of the beginning of the season. There are other options to fill out the back, such as Austin Gomber, Ryan Feltner and Noah Davis. In the case of Davis, he is unproven as he has just a single inning of MLB experience at this point. Gomber and Feltner are a bit more established, though they each posted ERAs above 5.50 in 2022.

Given that uncertainty, this signing should only be the beginning of the steps the Rockies take to address their rotation before Opening Day. They might not be well-positioned to be huge players in the free agent pitching market, given their payroll. Roster Resource estimates that today’s signing pushes next year’s outlay to $157MM. The franchise record for an Opening Day figure is $131MM, per Cot’s Baseball Contracts, meaning they are already almost $30MM into uncharted waters here. Given those circumstances, and the fact that free agent pitchers are usually loath to voluntary make Coors Field their home, the next moves could come via other means or might be similarly modest.