The Diamondbacks and third baseman Evan Longoria are in agreement on a one-year deal that will guaranteed him $4MM with another $1MM available in incentives. Longoria is a client of TWC Sports.

Longoria, 37, will be joining just the third organization of his long career, having only previously suited up for the Rays and Giants. He broke in with Tampa in 2008 and had his best seasons from there through 2013. In that six-year stretch, he hit 162 home runs and produced a batting line of .275/.357/.512. That production was 35% better than league average, as evidenced by his 135 wRC+, one of the 25 best such marks across the majors for that period. When combined with his quality defensive work, he tallied 34.2 wins above replacement, according to FanGraphs, the fourth-best mark among all position players with only Miguel Cabrera, Brian McCann and Yadier Molina ahead of him.

It was within that time that the Rays twice gave him a lengthy contract extension. The first came in his 2008 rookie season, a $17.5MM guarantee over six years, plus three club options. After the 2012 season, the second extension triggered the three club options and added another six years and $100MM. That deal ran through the 2022 season with a club option for 2023.

Longoria’s offensive production declined over the 2014-2016 period but was still above average. He hit .265/.322/.454 in that stretch for a wRC+ of 112, 12% better than par but a noticeable drop-off from his previous heights. He took an even bigger dip in 2017, hitting .261/.313/.424 for a wRC+ of 97. At the end of that season, Longoria had accrued nine years and 170 days of service time, just two days shy of the 10-year mark. That was a significant gap since getting to ten years would have given him 10-and-5 rights, as all players with 10 years of service time and who have been with their current team for at least five years earn the right to veto any trade. The ever budget-conscious Rays decided they had to move Longoria before he gained those rights and flipped him to the Giants going into 2018. 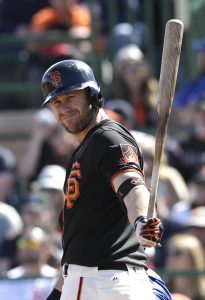 Since moving to California, it’s been a rocky time for Longoria. In his first three seasons as a Giant, he hit .250/.302/.425 for a wRC+ of 93. He bounced back to being an above-average hitter over the last two seasons but injuries limited his overall contributions. He slashed .253/.333/.466 over 2021 and 2022 for a wRC+ of 118, but in just 170 games. A left shoulder sprain and right hand contusion sent him to the injured list in 2021. Finger surgery put him on the shelf for the beginning of the 2022 season and he was later sidelined by a left oblique strain, a right hamstring strain and a thumb fracture.

The Giants had an $8MM decision to make on Longoria, choosing between a $13MM option or a $5MM buyout. Picking up that option and adding the $8MM onto their ledger would have been a defensible decision based on his resurgence at the plate, but there were also reasons for concern. Beyond the injuries, Longoria’s previously excellent defensive grades have slipped, a fairly expected development for a player moving into his late 30s. Also, his metrics like exit velocity and hard hit rate have been trending downward, not shocking for a player his age but something that had to be taken into consideration. In the end, the Giants decided to move on and went for the buyout, sending Longoria into free agency for the first time in his career.

Longoria expressed a preference for either returning to one of his two previous clubs or signing with the Diamondbacks, since he has a home in Arizona. In the end, he will indeed join the team near his home, with the club making for a fairly sensible fit for him. A young up-and-coming team, the D-Backs could surely benefit from having a veteran presence like Longoria in the clubhouse and in the dugout.

In terms of the fit on the roster, third base wasn’t completely secured prior to this deal. Josh Rojas has been serving in a utility capacity over the past few years, spending some time in the outfield corners as well as the three infield positions to the left of first base. In 2022, he spent most of his time at third, getting into 89 games there. While he was above-average offensively, the advanced defensive metrics all considered his glovework to be below average. It’s possible that he could still take a step forward in that department since he didn’t play much third base in the minors and is surely still learning the position, but bringing Longoria’s experience aboard should only help there.

There will also be platoon possibilities since Rojas hits from the left side and Longoria the right. Rojas has fairly even splits for his career but was better against righties in 2022, posting a 114 wRC+ with the advantage and a 92 otherwise. Longoria, meanwhile, has a 132 wRC+ against southpaws in his career with a 113 against righties. That would seem to make them a good pairing, though injuries elsewhere on the roster could potentially require Rojas to move elsewhere on the diamond. The club also doesn’t really have an obvious designated hitter at the moment, which could allow both players to be pencilled into the lineup together with regularity, unless Arizona’s many young outfielders eventually push start crowding into the DH mix. But if Longoria were to act as the DH with some frequency, it could give him an edge in overcoming his recent injury track record.

This deal brings the club’s payroll up to $109MM, according to the calculations of Roster Resource. That’s a big jump from last year’s $91MM figure, per Cot’s Baseball Contracts, but the club has been as high as $132MM in the past.