Dec. 16: The Phillies have announced the signing.

Dec. 6: One day after landing Trea Turner on a stunning 11-year contract, the Phillies have bolstered their rotation by agreeing to a four-year deal with free-agent right-hander Taijuan Walker, Jon Heyman of the New York Post reports (Twitter links). MLB.com’s Anthony DiComo adds that Walker, a client of the Boras Corporation, will be guaranteed $72MM on the deal. 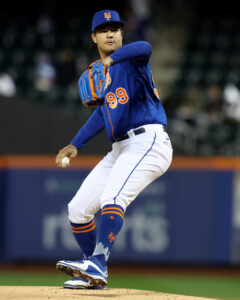 Walker, 30, steps into a deep and talented rotation headlined by co-aces Zack Wheeler and Aaron Nola. He’ll join lefty Ranger Suarez in the third and fourth spots of a rotation whose fifth starter has yet to be determined. Philadelphia president of baseball operations Dave Dombrowski said earlier this offseason that he aimed to sign one veteran starter and leave a starting job open for one of the Phillies’ many in-house options — a list that currently includes left-hander Bailey Falter and top prospects Andrew Painter, Mick Abel and Griff McGarry.

The Phils could yet add some further depth, but based on Dombrowski’s earlier comments and the fact that they’ve committed a combined $372MM to Turner and Walker in the past day, it seems unlikely that another high-profile addition is in store. In the wake of agreeing to terms with Turner, Dombrowski voiced a desire to add a mid-rotation arm and to add a back-end reliever — ideally without signing a free agent who’d turned down a qualifying offer. The terms of Walker’s four-year deal have exceeded even the most bullish of expectations, but he nevertheless checks the former of those two boxes, ostensibly setting the stage for the Phillies to shift their sights to the bullpen market.

Walker, a once-elite pitching prospect who pitched just 14 innings from 2017-18 due to shoulder surgery and Tommy John surgery, has quickly shaken the “injury-prone” label once associated with his name. Since signing a one-year deal to return to the Mariners in advance of the 2020 season, the 6’4″, 235-pound righty has made a nearly full slate of starts: 11 games in the 60-game 2020 season followed by consecutive seasons of 29 starts with the Mets in 2021-22.

Along the way, Walker has pitched to a 3.80 ERA with a 21.5% strikeout rate, a 7.8% walk rate and 43.4% ground-ball rate in a total of 369 2/3 innings. While he’s hardly a flamethrower, Walker sits 93-94 mph with his four-seamer and complements that heater with a four-pitch mix of secondary offerings: splitter, sinker, slider and a more seldom-used curveball. He’s only averaged a bit more than 5 1/3 innings per start in recent years, but some of that could well be a function of the Mets preferring to keep him healthy.

While many teams are reluctant to allow starters to turn a lineup over three times, Walker’s third-time-through-the-order splits are actually fairly strong. Since 2020, when facing an opponent for the third time in a game, Walker has yielded only a .232/.303/.391 batting line. That translates to a .303 wOBA that’s tied with one of his new rotation-mates, Nola, for 37th among 132 starting pitchers in that three-year period.

Solid as Walker’s past few seasons have been, the $72MM guarantee he secured on his new contract remains a fairly eye-popping number. It’s been a bull market for starting pitchers thus far, to say the least, but an $18MM annual value over a four-year term represents a seismic step forward in the market for mid-rotation arms. Walker undoubtedly benefited from his relative youth and a lack of a qualifying offer, but guarantees of this size for a pitcher of this caliber, while not unprecedented, are quite rare. Moreover, while we’ve seen starters of this ilk land guarantees in this range in the past — the Royals signed Ian Kennedy for $70MM, and the Marlins inked Wei-Yin Chen for $80MM — they’ve typically been spread out over a five-year term. Precedent for an AAV of this magnitude, over a relatively long-term deal, for this caliber of pitcher is scarce.

None of that is a knock on Walker, who’s pitched well in his three years since returning from that pair of seasons lost to injury. And, if Walker can continue to pitch at a pace commensurate with his 2022 output in particular, he’ll end up justifying the deal. That said, he’s reached 150 innings only four times in his Major League career and only twice logged a sub-4.00 ERA in a 162-game campaign, so expecting a replica of his 2022 output — particularly in light of a shaky batted-ball profile — would be quite optimistic.

The Phillies, however, needed some stability with Kyle Gibson, Zach Eflin and Noah Syndergaard all reaching free agency, and the prices for arms this winter have been strong. Eflin, for instance, landed a $13.33MM AAV in a three-year deal with the low-budget Rays of all teams, and did so on the heels of a season in which he pitched just 75 2/3 innings. Gibson, who turned 35 in October and yielded a 5.05 ERA in 31 starts for the Phillies, still secured a $10MM guarantee on a one-year deal in Baltimore. The price of average-or-better innings — and the price for pitchers who can reliably provide those innings — looks to have increased in the early stages of the newly brokered 2022-26 collective bargaining agreement.

From a payroll vantage point, adding Walker will boost the Phillies to a projected $223.5MM in bottom-line payroll next year, per Roster Resource (assuming an even distribution of the salaries). Moreover, Walker’s $18MM AAV will push the Phillies into luxury-tax territory for what’ll now be a second straight season. They currently project at $235MM, just $2MM north of the $233MM barrier, but it seems fair to expect further additions will be on the horizon — in the bullpen at the very least. As a second-time offender, the Phils will pay a 30% overage on the first $20MM by which they exceed that $233MM line, and they’ll be on the hook for a 42.5% penalty for any overages between $20-40MM.

That seems to matter little to owner John Middleton, who just saw his Phillies fall to the World Series champion Astros in a competitive six-game affair. With Nola set to become a free agent next winter, the 2023 campaign could be the last time he and Wheeler comprise the dynamic one-two punch atop the Philadelphia rotation. Wheeler’s contract is up after the 2024 season, and J.T. Realmuto will turn 32 before Opening Day 2023. The time to win in Philadelphia is now, and in very on-brand fashion, their aggressive owner and similarly aggressive president of baseball operations are making high-priced, straightforward upgrades via the free-agent market to bolster the franchise’s hopes while this elite core is still together and still in its prime.