The Pirates and left-hander Rich Hill are in agreement on a one-year, $8MM deal, reports Jeff Passan of ESPN. The deal is pending a physical. Hill is an ACES client.

Hill, 43 in March, has one of the most unique baseball stories. He had some success as a starter early in his career, which began with the Cubs. Back in 2007, he made 32 starts for the Cubbies, tossing 195 innings with a 3.92 ERA. However, injuries and underperformance led to an extended period of struggle for Hill. He didn’t reach 60 MLB innings pitched in any season from 2008 to 2015, often struggling with his health or command or both while bouncing to Baltimore, Boston, Cleveland, the Angels and the Yankees.

Hill’s struggles were so pronounced that he wound up pitching for the Long Island Ducks for a spell in 2015, but he showed enough promise there to earn a minor league deal from the Red Sox. He got promoted late in the season and made four starts with an ERA of 1.55. That was enough for the A’s to take a gamble on him, as they signed him to a $6MM deal for his age-36 season. Hill cemented his improbable late-career comeback by posting a 2.12 ERA in 2016 over 20 starts and has continued to generally post solid results in each year since. 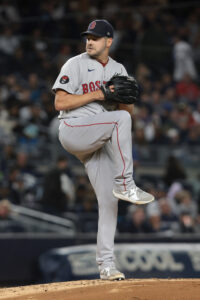 Hill isn’t a workhorse, as he hasn’t hit 160 innings in any season outside of that 2007 campaign with the Cubs. What he has been able to provide in recent years is generally strong innings on a rate basis. From 2016 to the present, he’s made at least 20 starts and logged at least 110 frames in five of the six full seasons, with 2019 being the lone exception when a forearm strain limited him to just 13 starts and 58 2/3 innings. In that time, he has a 3.39 ERA, 25.8% strikeout rate, 8% walk rate and 39.7% ground ball rate, spending time with the A’s, Dodgers, Twins, Rays, Mets and Red Sox.

The southpaw hasn’t been quite as successful in the past three seasons, especially in the strikeout department. While he punched out 29% of batters faced from 2016 to 2019, it’s been just 21.6% since then. That’s pushed his ERA up as well, as he got to 4.27 with Boston in 2022, with a 20.7% strikeout rate, 7% walk rate and 40.2% ground ball rate this year. Nonetheless, he’s still found ways to be effective, as his hard hit rate was in the 79th percentile this year and his average exit velocity in the 56th.

Going into his age-43 campaign, Hill still garnered plenty of interest on the open market this offseason. The Orioles, Angels, Rangers and Red Sox all showed some interest, but it’s the Pirates that have secured his services for 2023. Hill is the second rotation addition the club has made this offseason, as they also added Vince Velasquez a few weeks ago. Those two should slot next to Mitch Keller, JT Brubaker and Roansy Contreras in the club’s rotation, bumping Bryse Wilson to a long-relief role in the bullpen. The club will have Johan Oviedo, Luis Ortiz and some other arms available as depth for inevitable injuries or future trades. For those clubs that missed out on Hill, the free agent starting pitching market is now topped by the likes of Nathan Eovaldi, Corey Kluber, Michael Wacha and Johnny Cueto.

The Bucs have been firmly in rebuild mode for a few years and are coming off a 100-loss season, but they’ve been fairly active in adding veterans for 2023. They acquired Ji-Man Choi in a trade with the Rays and have also signed Carlos Santana, Austin Hedges and Jarlín García, as well as adding Velasquez and Hill to the rotation. All of those players are lined up to be short-term additions, as they are each slated for free agency after 2023. Though those players could make the club more competent for the upcoming season, they’re also lined up to be trade candidates about half a year from now unless the Pirates suddenly take a huge leap forward in their rebuilding process. Regardless, they should all be able to impart some wisdom to the younger players from their years in the game, with Hill the most qualified to contribute in that capacity. The retirement of Albert Pujols leaves him as the oldest player in the majors.

Financially, this signing bring the Pittsburgh payroll up to $70MM, according to the calculations of Roster Resource. That puts the club well beyond last year’s $56MM, per figures from Cot’s Baseball Contracts, but well shy of their franchise record of just under $100MM. There’s no real long-term investment to speak of, as Ke’Bryan Hayes is still the only player under contract for 2024, but this winter’s crop of one-year deals represents the most aggressive additions for the team in a few years.