Right-hander David Phelps is retiring, he announced this evening through his agents at Wasserman (Twitter link). Phelps thanked his former teammates, coaches, medical staff, agency and family as well as all the organizations for which he played in a lengthy statement.

A Notre Dame product, Phelps cracked the professional ranks a 14th-round selection of the Yankees in 2008. A few seasons of strong minor league performance garnered him some prospect attention as a potential back-end starter. He reached the big leagues for the first time in April 2012, kicking off a rookie season in which he’d post a 3.34 ERA through 99 2/3 innings. Phelps also pitched three times for New York that postseason, logging 3 1/3 innings in what would prove his only career playoff action.

Phelps started 11 of 33 outings for New York that year and held a similar swing role for the next couple seasons. For the first three seasons of his career, he’d toss 299 1/3 innings with the Yankees over 87 appearances (40 starts). He posted a cumulative 4.21 ERA while holding opponents to a .251/.330/.399 slash. Over the 2014-15 offseason, New York dealt Phelps and infielder Martín Prado to the Marlins for Nathan Eovaldi, Garrett Jones and then Low-A pitcher Domingo Germán, who’s still a Yankee more than eight years later. 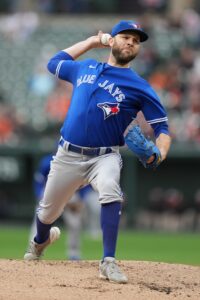 During his first season with the Fish, Phelps remained primarily a rotation member. He started 19 of 23 outings, working to a 4.50 ERA. By his second season in South Florida, he’d moved almost exclusively to relief. That kicked off a second act as a generally reliable bullpen arm. Phelps posted a 2.28 ERA with a 32.4% strikeout percentage over 86 2/3 innings in 2016. After throwing another 47 frames with a 3.45 ERA in the next season’s first half, he changed organizations for a second time.

The Mariners acquired Phelps in a deadline deal that sent four prospects to Miami. Three of those players never reached the big leagues, but the Marlins’ acquisition of then High-A righty Pablo López turned out exceptionally well. The trade wasn’t especially successful for the Mariners, as Phelps pitched just 10 times before suffering an injury to his throwing elbow. He first underwent surgery to remove bone chips from the joint, then unfortunately required a Tommy John reconstruction that cost him the entire 2018 campaign.

Phelps hit free agency for the first time that offseason, landing with the Blue Jays on a buy-low $2.5MM pact. Once he returned to health, he proved a single middle-innings option for Toronto. Phelps performed well in 17 appearances before being traded to the Cubs at the deadline for Tom Hatch. He had a fine second half before again hitting free agency when Chicago declined a club option for 2020.

The past three seasons have seen the Missouri native continue to bounce around the league. He signed a one-year guarantee with Milwaukee going into 2020 and was dealt to the Phillies for a trio of minor league pitchers at the deadline. Phelps was hit hard in his limited time with Philadelphia, leading the club to decline an option. He returned to Toronto on a one-year deal over the offseason and got off to a brilliant start through mid-May.

Injuries again intervened, though, as Phelps suffered a rupture of his right lat. That required season-ending surgery, one which Phelps acknowledged he initially believed would end his career. He was fortunately able to rehab and got another shot on a minor league deal with Toronto last offseason. He cracked the MLB roster out of camp for what’d be his third season as a Blue Jay.

Phelps would conclude his career with a flourish. He stayed healthy all year, a significant accomplishment in its own right given the injury he’d suffered the season before. Phelps posted his best numbers since his Miami days, providing the Jays 63 2/3 innings of 2.83 ERA ball through 65 appearances. That’d quite likely have earned him another MLB contract this winter if he wanted to return for an 11th season. Phelps indicated he’d known by the end of last season he was finished playing, however.

He spent a decade and a half in the professional ranks, including the past 10 years at the MLB level. Over 682 2/3 career frames, he posted a 3.80 ERA while striking out 22.9% of opposing hitters. In addition to his 67 starts, he finished out 45 games (including seven saves). Phelps held 78 leads as a middle reliever or setup option, suiting up for seven organizations. Baseball Reference calculated his career earnings a hair above $15MM. MLBTR congratulates Phelps on a long and accomplished career and wishes him all the best in his post-playing days.