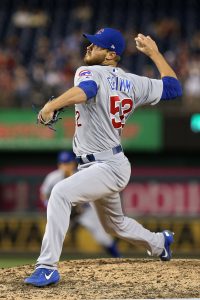 The Mariners have outrighted right-hander Christian Bergman, per a club announcement. That move clears another 40-man roster slot after the team lost righty Sam Gaviglio to a waiver claim earlier today; it’s also just one of the many transactions entered today by the ever-active M’s front office.

Righty David Phelps has returned to the 10-day DL due to an elbow impingement. He missed time earlier this month and has not looked himself of late. Indeed, Phelps has lost about two miles per hour on his average fastball as compared with the first four months of the season.

In more positive news relating to injuries, both outfielder Jarrod Dyson and righty Shae Simmons have returned from their own runs on the disabled list. The latter had been on the 60-day DL while working back from a flexor strain.

Catcher Mike Marjama was added to the 40-man roster and promoted to give the team another option behind the dish. The team also activated just-acquired righty Mike Leake.

With no limitations on the active roster, the M’s have also brought up a few players that were on optional assignment. Three right-handed pitchers — Dan Altavilla, Ryan Garton, and Andrew Moore — are on their way to help bolster the bullpen.

The Royals have claimed righty Sam Gaviglio off waivers from the Mariners, per an announcement from the Seattle organization. Kansas City, meanwhile, has released veteran hurler Neftali Feliz, MLB.com’s Jeffrey Flanagan tweets.

As for Feliz, the 29-year-old landed with the Royals after an unsuccessful run with the Brewers earlier this year. He gave K.C. twenty outings of 4.74 ERA ball, averaging 7.6 strikeouts and 3.8 walks per nine. Milwaukee will continue to pay the remainder of the $5.35MM owed to Feliz for the season.

SATURDAY: The Mariners have announced that Mariners Medical Director E. Edward Khalfayan has confirmed that Iwakuma has inflammation in his right shoulder. Iwakuma is expected to miss four to six weeks.

WEDNESDAY: The Mariners announced that they’ve placed right-hander Hisashi Iwakuma on the 10-day disabled list due to inflammation in his right shoulder. In a corresponding move, the Mariners selected the contract of right-hander Sam Gaviglio from Triple-A Tacoma, also transferring righty Evan Marshall to the 60-day DL to clear a spot on the 40-man roster for Gaviglio. Iwakuma, according to Ryan Divish of the Seattle Times (on Twitter), is headed back to Seattle for an MRI.

Iwakuma becomes the latest Mariners starter to land on the disabled list, joining Drew Smyly, James Paxton and Felix Hernandez on the shelf. With a stunning 80 percent of their Opening Day rotation on the disabled list, Seattle has turned to lefty Ariel Miranda and offseason acquisitions Chase De Jong and Dillon Overton in the rotation mix. Gaviglio may eventually join that mix, though for now right-hander Christian Bergman will step into the rotation and make a start in Toronto, Bob Dutton of the Tacoma News Tribune tweets.

Iwakuma’s status is especially worth monitoring due to the fact that his health will determine whether his 2018 option vests. As noted yesterday when parsing through the vesting options around the league, Iwakuma is just 94 innings shy of locking in a $10MM salary for the 2018 season.