The NFL Draft is here!  This year’s draft is the hardest one to predict in recent memory and you’ll want to stay tuned to Pro Football Rumors for every update whether you’re a casual or hardcore NFL fan.

The draft is hours away and we still don’t know who the No. 1 overall pick will be.  Most of the football world views Texas A&M defensive end Myles Garrett as the top overall talent in this year’s class, but Browns ownership is reportedly pushing for UNC quarterback Mitch Trubisky.  If the Browns bypass the best player available in favor of the best quarterback available, it will trigger a ripple effect that will turn the rest of the first round upside down.

The uncertainty doesn’t stop there. The 49ers could break with tradition and select running back Leonard Fournette at No. 2.  The Bears, at No. 3, are eager to trade down.  The Jaguars, picking at No. 4 overall, are reportedly considering Clemson quarterback Deshaun Watson, a player previously projected as a late first round or early second round type.  With so many question marks early on, the entire draft is in flux and things could get insane.  We mean that in a good way.

The NFL playoffs are getting underway and, for 12 teams, that means a shot at a Super Bowl ring.  For the rest of the league, the focus has already shifted to the 2017 season.  Even if you’re just a casual NFL fan, Pro Football Rumors is a must-follow on Twitter. 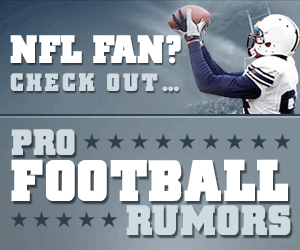 The Rams, Chargers, 49ers, Jaguars, Bills, and Broncos are in search of their next head coach.  Naturally, Los Angeles is being linked to the celebrities of the coaching world.  The Rams are reportedly interested in yanking Jon Gruden out of the Monday Night Football booth and back on to the sidelines.  They’re also entertaining the idea of trading for Saints head coach Sean Payton.  Meanwhile, the Jaguars are giving serious thought to hiring Tom Coughlin, who turns 71 in August.  You can keep up with every development by following us on Twitter and checking PFR’s 2017 NFL Head Coaching Search Tracker.

Beyond that, the frenzy of free agency and the NFL Draft are on the horizon.  This year’s free agent class could include the likes of quarterback Kirk Cousins, defensive end Chandler Jones, wide receiver Alshon Jeffery, and running back Le’Veon Bell.

Stay in the loop by following us @pfrumors on Twitter and by bookmarking ProFootballRumors.com.

The NFL’s free agent period will officially begin in less than 24 hours and several big name players are poised to change teams.  The Broncos badly want to elevate quarterback Brock Osweiler to the starting role in 2016, but he will be courted by the Texans and several other teams if he is not signed by tomorrow.  Dolphins defensive end Olivier Vernon is arguably the best pass rusher in this year’s crop and the Giants, Raiders, Browns, and Titans are in pursuit.  The Jaguars are also high on Vernon and they could pair him with the newly-signed Malik Jackson. Seahawks linebacker Bruce Irvin could join up with an NFC West rival and Dolphins tailback Lamar Miller could land with another team in the state of Florida.  You can keep up with these storylines and many, many more with Pro Football Rumors.

Whether you’re a hardcore football fan or more of a casual watcher, you’re going to want to stay plugged in with PFR all offseason long.  Here’s how you can get our up-to-the-second NFL news: