The White Sox have reached a deal with free agent reliever Steve Cishek, per Jeff Passan of ESPN.com (via Twitter). He’ll be guaranteed $6MM in the pact, which per MLB.com’s Mark Feinsand (Twitter link) includes his 2020 salary and a $750K buyout of a $6.75MM option. 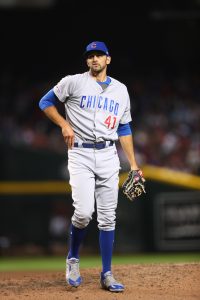 It’s a move that reflects the shifting tides of Chicago’s two sides. Cishek had stabilized the Cubs’ pen for the past two years. With his former team pressing up against its budget ceiling, he’ll cross town to take up a late-inning role with a White Sox organization that is hopeful of a breakout 2020 campaign.

Cishek has sidearmed his way through an awful lot of good innings over ten seasons in the majors. He has worked to a 2.69 ERA in 556 total frames and never once finished a full season with an ERA over 3.58. Having picked up 132 saves along the way, Cishek is no stranger to high-leverage spots.

Can the South Siders expect more of the same? There are conflicting signs. Cishek’s strikeout rate has wavered over time; last year’s 10.5% K%-BB% was a personal low. But he still generated grounders on half of the balls put in play against him, limited the long ball nearly as well as ever (at least compared to the league average), and held opponents to a sub-.250 BABIP for the fourth-straight season. Statcast identified some good fortune (.285 wOBA-against; .313 xwOBA-against) but found that Cishek was elite at limiting hard contact (25.9%) and exit velo (84.5 mph).

It’s ultimately hard to argue with the results, even if they haven’t always quite been supported by the peripherals. Cishek doesn’t throw hard but generates lots of spin. He’s an unconventional pitcher who has proven consistently capable of befuddling MLB hitters. He’s unquestionably better against same-handed hitters, though that’s true of most hurlers.

Cishek may not on the upswing at 33 years of age. But he’s a nice get on a one-year deal. That suits the needs of a White Sox organization that wants to boost its immediate chances without risking too much future payroll space on veteran players.

We’ll highlight a couple notes from around the league to kick off Sunday morning.

Even as they continue to press for rotation improvements, the Twins are exploring options at the top of the market for relief pitching. It seems the team is casting an exceptionally wide net, per reports from Darren Wolfson of 1500 ESPN (via Twitter) and Kristie Ackert of the New York Daily News (Twitter link).

To this point, the Twins have already been rumored to be pursuing a reunion with sturdy veteran Sergio Romo — albeit perhaps not quite as enthusiastically as some other teams — while also joining a crowded group with interest in bounceback target Blake Treinen. Other candidates of each ilk have now been identified.

The Minnesota organization has looked into free agents Daniel Hudson, Steve Cishek, and Will Harris, according to Wolfson. That trio landed in our ranking of the top 50 free agents, with each prognosticated to secure a two-year pact with a guarantee of $10MM or more. They’re arguably a tier up from Romo on the market, though all of essentially the same subclass — veteran righty relievers with ample late-inning experience coming off of productive seasons.

Treinen is a much higher-variance hurler. When he was non-tendered, he joined a bounceback market led by Dellin Betances, who is hoping to return to form after an injury-ruined 2019 season. The Twins are at least giving internal consideration to pursuing Betances. It’s a bit of a dice roll since we don’t yet know whether he’ll be at peak physical form, but a single-season gamble on the high-octane hurler would seem to suit the Twins rather well.

The Cubs have optioned utility man David Bote to Triple-A, as Gordon Wittenmyer of the Chicago Sun-Times was among those to tweet. It seems that’s the roster move to make way for the return of righty Steve Cishek.

Bote, 26, has been a constant presence on the MLB roster this year since inking a surprise extension in April. He was off to a big start but cooled off considerably over June and July. After a recent hot streak, he’s sitting right near the league average offensively with a .257/.352/.429 slash over 310 plate appearances.

Given the difficulties, it’s no surprise that Bote has lost playing time over the course of the season. He has mostly appeared at third base, with Kris Bryant moving to the corner outfield on such occasions. Defensive metrics have taken a dimmer view of Bote’s work at the hot corner than they did last year, for what it’s worth.

More than anything, this move simply represents some late-August roster management — though it is also reflective of an evolving lineup pecking order. Bote will get some steady plate appearances at Triple-A before rosters expand at the outset of September, at which time he’ll surely be summoned back to the majors. No matter how things shake out down the stretch, he’s playing on a guaranteed contract through 2024 with two additional seasons of club control via option.

MLB.com’s Jordan Bastian offers that the “expectation” is that Cubs closer Craig Kimbrel will be activated for Sunday’s contest with the Pirates. Signed this midseason to a 3-year/$43MM contract, Kimbrel got off to a rocky start in Chicago before a knee injury robbed him of participation in the club’s last 13 games. Through his first 14 appearances in blue pinstripes, the bearded hurler holds a 5.68 ERA across 12.2 IP. While the club is yet to announce his activation, Gordon Wittenmeyer points out that Kimbrel was on the team’s travel roster for their charter to Williamsport, Pennsylvania, and is indeed expected to be activated from the injured list in time for the third edition of MLB’s Little League Classic (link).

Wittenmeyer also relays that Steve Cishek appears as though he’ll be ready to return from the IL on Tuesday after throwing another bullpen session Saturday. Both returns would be welcome news for Cubs skipper Joe Maddon, who has been tinkering with troublesome iterations of Pedro Strop, Kyle Ryan, Derek Holland, and Brandon Kintzler in late-game situations.

More news from around the senior circuit…

Hip inflammation will send Cubs reliever Steve Cishek to the injured list, according to a report from MLB.com’s Jordan Bastian. Bastian’s report characterizes Cishek’s ailment as “minor”, but one that has nonetheless been a hindrance to the righty in his last several appearances.

Cishek, a veteran of 556 MLB games, has been a solid member of the Chicago relief corps since signing a two-year/$13MM accord with the club in December of 2017. In 54 appearances in 2019, the Massachusetts native has recorded a 3.58 ERA, despite underlying metrics that indicate that he has been the beneficiary of some good luck to this point.

So far in 2019, the Chicago bullpen has seen more movement than O’Hare International–following this injured list placement, Pedro Strop and Tyler Chatwood are the only active relievers left from the Cubs’ Opening Day lineup. It doesn’t appear, however, that Cishek will be sidelined for a long period, and the club may soon welcome back Craig Kimbrel in time for its upcoming series against the Phillies.

Dec. 16: The Cubs have announced the signing. Mark Gonzales of the Chicago Tribune reports that the two-year deal is worth $13MM. Chris Cotillo of MLB Daily Dish adds that the deal includes up to $1MM in performance escalators based on appearances.

Dec. 14: The Cubs have agreed to terms with righty Steve Cishek, according to Ken Rosenthal of The Athletic (via Twitter). Once he passes a physical, the Jet Sports Management client is expected to receive a two-year deal worth somewhere in the range of $12MM to $14MM, per ESPN.com’s Jerry Crasnick (via Twitter). 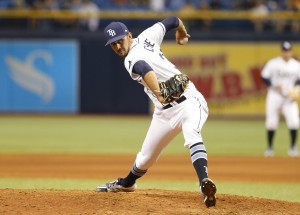 Cishek, 31, has had a few ups and downs at times in recent years and has played with four organizations in the past three seasons. For the most part, though, he has continued to function as a quality setup option.

In the 2017 campaign, Cishek opened with the Mariners and ended up moving to the Rays via mid-season trade. With an excellent push down the stretch in Tampa Bay, he ended the season with 44 2/3 innings of 2.01 ERA ball and 8.3 K/9 with 2.8 BB/9. As usual, Cishek was tough to square up; he permitted just 26 base hits and three total home runs on the season.

Those results came despite a notable velocity drop from Cishek, who delivered his two-seam fastball at less than 91 mph for the first time in his career. His slider came in eight ticks slower than it did in his debut season, continuing a trend, though it also gained horizontal movement.

The sidearming Cishek will offer a different look out of a re-worked Cubs pen. He joins Brandon Morrow as multi-year free agent additions for Chicago thus far. It still seems likely the organization will look for additional pieces over the coming weeks.

Surprisingly, the Padres have been among the most aggressive suitors for free agent first baseman Eric Hosmer this offseason. While the rebuilding Padres likely wouldn’t be near-term contenders even with Hosmer, they regard the longtime Royal as enough of a culture-changing player to justify their attempt to sign him, Dennis Lin of the San Diego Union-Tribune reports. But Hosmer’s still seeking a contract in the $200MM range, according to Lin, who doubts San Diego likes him enough to bid that much (Twitter link).

Elsewhere, the Padres seem to be making some headway in their efforts to add a shortstop, Lin tweets. GM A.J. Preller says the club has at least narrowed the list of possibilities to a handful or so. They’ve been connected to the likes of Freddy Galvis, Zack Cozart and Alcides Escobar (Hosmer’s teammate in Kansas City) recently.

More from around the majors as the meetings wind down…

While the market for starters is still fairly slow to develop, relievers have been flying off the board at the Winter Meetings. Here’s the latest chatter on some hurlers from around the game:

With lots of information flying around the Winter Meetings, let’s check in on a few interesting notes on the pitching market: