The Mets are next in our Offseason In Review series. 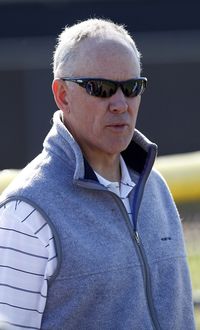 The biggest move of the Mets' offseason was undoubtedly the hiring of Sandy Alderson as GM in October.  Alderson's small-market experience will be an asset with the Mets, as his payroll flexibility may remain limited for part of his four-year contract due to the Wilpons' Madoff-related issues.  The new Mets front office has an analytical feel to it, as Alderson hired Paul DePodesta and J.P. Ricciardi.  Additionally, Terry Collins is aboard as the new manager.  Let's take a look at Alderson's first offseason.

Exercising Reyes' option at $11MM was a no-brainer.  If Reyes has a strong first half, Alderson may be tasked with restocking a poorly-rated farm system by trading his shortstop.  Releasing Oliver Perez was also a fairly obvious choice, as he simply isn't worth a roster spot despite his $12MM salary.  Cutting Castillo might be considered a baseball decision as well as one for the fans.  If Emaus has even a little bit of upside, he's the right pick at second base.

Like the Mariners, the Mets are a big-budget team but don't appear to be a player or two away from contention in 2011.  Shopping the bargain bin was the right move for Alderson.  Capuano and Young in particular have upside for a minimal commitment.  The other moves amount to tinkering.  Between second base, the rotation, and the bullpen, the Mets have a lot of opportunity for players to step up.

Speaking of the bullpen, it's imperative that the Mets find a way to prevent Francisco Rodriguez from finishing 55 games, as that would trigger a 2012 option adding a net cost of $14MM.  I agree with Brian Costa of the Wall Street Journal – the Mets could employ a more sabermetric bullpen strategy, using K-Rod in all kinds of high leverage situations.  Then when the reliever's agent files a grievance, the Mets can cite legitimate baseball reasons as their motivation.  The downside is that future free agent targets may be turned off if the Mets try to sneak around a contract clause to which they agreed.  One DL stint for Rodriguez may make the whole issue a moot point.

2011 figures to be a transition year for the Mets, perhaps with the goals of trading Reyes, getting Rodriguez and Carlos Beltran off the books, spending more on amateur talent, and figuring out what the team has for 2012.