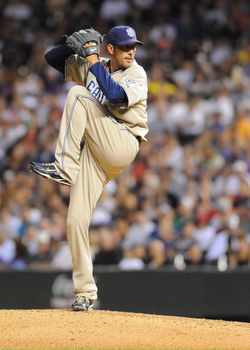 The Rangers' bullpen may be a strength instead of a weakness for the final two months of the season.  A day after acquiring Koji Uehara from the Orioles, Texas obtained Mike Adams from the Padres.  Pitching prospects Robbie Erlin and Joe Wieland go to San Diego in the deal, the Padres announced.

Erlin and Wieland, who are both represented by Sosnick Cobbe Sports, ranked fourth and 22nd in Baseball America's preseason Rangers top 30 prospects list prior to the season.  Wieland has seen his stock rise since then, with a 1.23 ERA in 44 Double-A innings – including a no-hitter his last time out.  Erlin, a 20-year-old southpaw, is considered among the top 35 prospects in the game by Baseball America and Kevin Goldstein.

The Padres' asking price (which I reported two days ago) was high, since Adams is under team control through 2012.  He earns $2.54MM this year and since setup men don't make as much as closers in arbitration, he'll be affordable next year.  Uehara will also figure into Texas' bullpen in 2012.

Evan Grant and Corey Brock reported the deal this afternoon after I reported the Padres' asking price two days ago. Ben Nicholson-Smith contributed to this post. Photo courtesy Icon SMI.