I would say the Cubs have no chance of unloading combustible righty Carlos Zambrano this offseason, but the Vernon Wells trade showed that even the game's worst contracts can be moved.  The big difference there: Wells was coming off a solid 31 home run season and doesn't come with clubhouse baggage.

Cubs GM Jim Hendry has been through this once before, ditching a little bit of Milton Bradley's contract and actually getting some value out of Carlos Silva in 2010.  There was no way the Cubs weren't going to dump Bradley that offseason, and it's possible their thinking is the same regarding Zambrano. 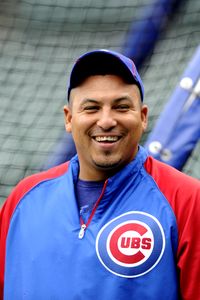 We don't need to run through Zambrano's history; suffice it to say that he has big-time negative trade value.  Contract and attitude aside, Zambrano the 30-year-old pitcher still has some use at the back end of a rotation.  He's consistently posted SIERAs in the 4.30 range, something for which plenty of teams pay around $4MM.  However, teams signing the Kevin Correias of the world are hoping for innings, which Zambrano has not provided lately.  And unlike most back-end starters signed on the free agent market, Zambrano has the potential to be a clubhouse distraction.

That's why Zambrano cleared waivers even before his latest incident: he has major negative trade value.  He could only be dealt for a player the other team wants nothing to do with, and the Cubs would have to send money or take a bad contract to match up with his $18MM salary for 2012.  Here are 11 trade ideas, assuming Z is willing to waive his no-trade clause without compensation.