Two years ago, Rangers lefty C.J. Wilson struck me as a quality reliever, but certainly not someone who could eventually score a $100MM contract.  Now, with free agency just months away, I'm wondering if that could be his ceiling on the open market. 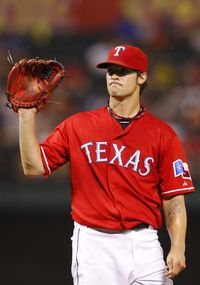 Wilson switched back to starting in 2010, and he exceeded expectations.  Though Wilson led the American League in walks, he also made 33 starts with a 3.35 ERA in the regular season.  Sure, his SIERA was 4.19, but the conversion was a success.  Had Wilson signed an extension after the 2010 season, giving up three free agent years for around $10-11MM apiece seemed appropriate.  The decision to wait paid off for Wilson, as he's taken his game to a new level in 2011.  The walks are down significantly, the strikeout rate is up, and he made the All-Star team.  Without Cliff Lee around, Wilson is the Rangers' undisputed ace.

Why do I think $100MM is possible?  Age is not a concern, as he turns 31 in November.  He's become a horse, but his overall mileage is low because of the time spent as a reliever.  He's succeeded in a tough home park and in the American League.  The advanced numbers are strong and he provides the fairly rare combination of strikeouts and groundballs.  Here's a look at the recent big pitching contracts signed on the open market:

It's easy to toss Wilson into the Lackey/Burnett bracket and expect a similar contract.  But Lackey had missed a month in each of his previous seasons and had totaled 373 innings.  Burnett was coming off a career-best 221 1/3 innings, but had pitched only 301 1/3 over the previous two seasons.  Meanwhile Wilson is projecting for perhaps 225 innings this year, for a total exceeding 450 over 2010-11.  He doesn't come with the injury concern Lackey and Burnett did.

Also consider that Burnett signed after the '08 season and Lackey after '09, so even if Wilson were comparable to them he'd deserve more based on inflation.  I think there's an easy case for $90MM over five years, so it's not crazy to think one team would add a sixth year or take him to the $20MM per year range.  This only applies if we're talking about a free agent bidding war – if the Rangers re-sign him prior to open season, it'll be for less.  It should be noted that the Yankees and Red Sox figured prominently into all four free agent contracts mentioned above, so their involvement with Wilson will be a huge factor.

We also have to look at what the free agent and trade markets will offer in terms of competition.  Sabathia could again be the free agent prize if he opts out, but he'll require a commitment well beyond Wilson that only a few teams could handle.  Sabathia could re-sign with the Yankees early on, which might take them out of the Wilson bidding but also leave him as the best available starter, easily above Edwin Jackson or Hisashi Iwakuma.  Yu Darvish being posted would shake things up, though some teams might still prefer Wilson.  The trade market figures to feature Wandy Rodriguez and perhaps a few surprises, but I'm not sure there's a Zack Greinke, Matt Garza, or Shaun Marcum-caliber pitcher in the mix for this offseason.