9:43am: Blue Jays GM Alex Anthopoulos made his biggest free agent signing in two-plus years at the helm, inking lefty reliever Darren Oliver to a one-year, $4MM deal.  The contract includes a $3MM club option for 2013, announced the team.  Oliver is represented by Jeff Frye. 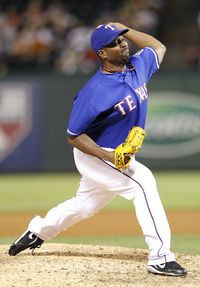 Oliver, 41, was a modified Type B free agent per the new collective bargaining agreement, meaning the Rangers will receive a supplemental first round draft pick as compensation (tentatively #51 overall). The Jays will not forfeit a pick. Oliver pitched to a 2.40 ERA in 112 1/3 innings for Texas the last two years, holding lefty batters to a .212/.250/.306 line during that time.  The Blue Jays have added Sergio Santos, Jason Frasor, and Oliver to their bullpen this offseason.

The Rangers and Angels expressed some interest in Oliver this offseason. The market for free agent lefty relievers is dwindling, with Mike Gonzalez and Arthur Rhodes representing the best of the remaining bunch.