7:30am: The Blue Jays have signed right-hander Brandon Morrow to a three-year, $20MM extension, the team announced. The deal includes a 2015 option for $10MM. The Blue Jays and the Wasserman Media Group client were known to be nearing an agreement last night. 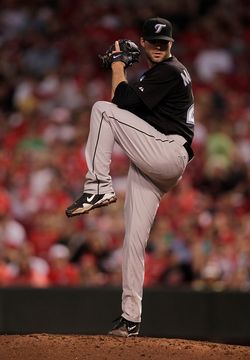 Morrow, who is arbitration eligible for the second time, had filed for a 2012 salary of $4.2MM, while the Blue Jays had countered at $3.9MM. The contract buys out both of his remaining seasons of arbitration eligibility and at least one free agent season.

Despite Morrow's ability to overwhelm opposing hitters — he led the American League in K/9 last year — he has posted below-average ERAs since joining the rotation. SIERA (3.31) and xFIP (3.53) suggest his ERA of 4.72 could have been considerably lower in 2011. There's reason for the Blue Jays to expect some improvement in terms of ERA, even if Morrow continues under-performing his peripheral stats. Though he's a fly ball pitcher (36.0% ground ball rate in 2011), he hasn't been particularly homer-prone (21 home runs in 2011).

MLBTR's Mark Polishuk examined Morrow as an extension candidate last August and his prediction (a three-year, $19MM deal with an $11MM option) came extremely close to the actual numbers. Shi Davidi of Sportsnet first reported that the sides were nearing a three-year, $20MM extension.