The Cubs have acquired first baseman Anthony Rizzo and right-hander Zach Cates from the Padres for right-hander Andrew Cashner and outfielder Kyung-Min Na, the teams announced. The move provides the Cubs with a potential long-term first baseman and makes room for another first baseman in San Diego. 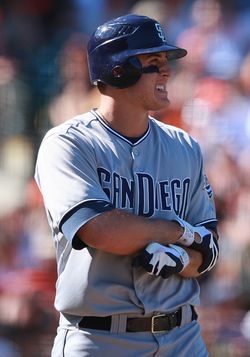 “The acquisition of Yonder Alonso provided us the flexibility to make this trade and acquire a quality, young power arm in Andrew Cashner,” Padres GM Josh Byrnes said. “We are happy to add a pitcher with the pedigree of Cashner and an outfielder with the athleticism of Na.”

The Cubs are presumably out of the running for free agent Prince Fielder with the acquisition of Rizzo. Bryan LaHair will open the season as the Cubs' everyday first baseman and Rizzo will play at Triple-A, GM Jed Hoyer said, tweets Paul Sullivan of the Chicago Tribune.

Rizzo, 22, debuted with the Padres last year, posting a .141/.281/.242 line in a 153 plate appearance cameo. He spent most of the season at Triple-A, where he posted a .331/.404/.652 line and hit 26 homers in 413 plate appearances. Baseball America ranked him 75 among MLB prospects entering the 2011 season and first among Padres prospects after the campaign ended. Even if Rizzo (pictured) sticks in the Major Leagues from this point on, he'll be under team control through 2017.

Cashner, 25, has a 4.29 ERA with 8.0 K/9 and 4.7 BB/9 in 65 innings over the course of two seasons with the Cubs. The 2008 first rounder spent much of the 2011 season on the 60-day disabled list with a strained right rotator cuff, but returned to make six appearances in September. He'll be under team control through 2016. The Padres will use Cashner out of the bullpen, Bob Nightengale of USA Today tweets.

Na, 20, has a .244/.335/.284 line in 519 plate appearances over the course of two seasons in the lower levels of the minor leagues. He has played all three outfield positions professionally and spent most of his time in center.

When the Red Sox drafted Rizzo in the sixth round of the 2007 draft, current Cubs president of baseball operations Theo Epstein was Boston's GM, Hoyer was his assistant GM and Jason McLeod was his scouting director. Hoyer, McLeod, Byrnes and the Padres acquired Rizzo from Epstein and the Red Sox in last offseason's Adrian Gonzalez deal. It's worth noting that Byrnes worked with Hoyer and Epstein in Boston before becoming Arizona's GM in 2005.