3:01pm: Enrique Rojas of ESPN Deportes reports (on Twitter) that the deal is worth $42MM, and the two option years could raise the value to $65MM.

12:49pm: The Nationals and Gio Gonzalez have agreed to terms on a five-year contract extension, the team announced. The deal runs through 2016, with club options for 2017 and 2018, and comes less than a month after the Nationals sent four prospects to the Athletics to acquire Gonzalez. The southpaw is an ACES client. 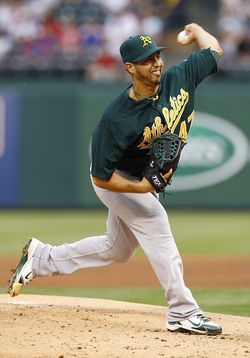 Gonzalez, 26, was eligible for arbitration for the first time as a Super Two this winter. Our projections pegged him for a $4.2MM salary in 2012. The extension will cover all four of Gonzalez's arbitration years plus one free agent year. With the two club options, the Nationals have potentially bought out three of the southpaw's free agent years.

Despite owning the rare distinction of being traded three times before making his big league debut, Gonzalez has emerged as one of the game's best young hurlers in recent years. He's coming off his strongest season to date, having recorded a 3.12 ERA and 8.8 K/9 in 32 starts. Despite leading the league in walks, the lefty earned his first All-Star berth and set a career high with 202 innings pitched.

When we looked at Gonzalez as an extension candidate last April, we mentioned that similar pitchers like Jon Lester, Ricky Romero, and Yovani Gallardo had signed five-year contracts worth approximately $30MM in recent years. Those deals also covered the pitchers' last four years of team control plus one free agent year, however none qualified as a Super Two. Gonzalez figures to command a slightly higher guaranteed salary, and MLBTR's Ben Nicholson-Smith believes $38MM or so is fair (Twitter link).

With Jordan Zimmermann and Stephen Strasburg under team control through 2015 and 2016, respectively, the top of the Nationals' rotation is set for the next half-decade. The club still has six unsigned arbitration-eligible players as our Arbitration Tracker shows: Tyler Clippard, Jesus Flores, Tom Gorzelanny, John Lannan, Mike Morse, and Zimmermann.