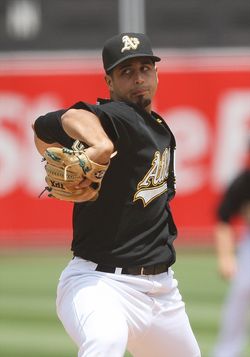 Gonzalez (pictured) will join Stephen Strasburg and Jordan Zimmermann atop an impressive-looking Nationals' rotation that also figures to include Chien-Ming Wang and John Lannan. Gonzalez, 26, is under team control through 2015. He has reached the 200-inning plateau in each of the past two seasons without posting an ERA above 3.23.

However, no MLB pitcher has walked more opponents than Gonzalez in the past two seasons and he's about to get expensive through arbitration (projected 2012 salary of $4.2MM). While most teams –the Nationals included — can stomach a $4.2MM salary for an established, young left-handed starter, the A's haven't resolved their stadium situation and operate under a more limited payroll.

Without Gonzalez and Trevor Cahill, two of the 40 MLB pitchers to throw 200 innings this past season, Oakland's rotation will look considerably different in 2012. Brandon McCarthy, Guillermo Moscoso, Brett Anderson, Dallas Braden, Tyson Ross and Josh Outman are possible starters for the A's, who entered the offseason with a deeper rotation than most.

Peacock (#3), Cole (#4) and Norris (#9) all rank among the Nationals' top ten prospects, according to Baseball America's latest rankings. Peacock emerged as "one of the most exciting power arms in the high minors" this year, BA reports. The 23-year-old posted a 2.39 ERA with 10.9 K/9 and 2.9 BB/9 in the upper minors before getting called up to the Nationals and appearing in three games.

Though Nationals GM Mike Rizzo would no doubt have preferred to acquire Gonzalez for lesser prospects, it was clear from the beginning of the offseason that Gonzalez would require a substantial return. The Red Sox, Rangers, Marlins, Yankees, Blue Jays, Tigers and Mariners were also linked to Gonzalez this winter. Earlier in the offseason, A's GM Billy Beane obtained minor leaguers Jarrod Parker, Collin Cowgill and Ryan Cook for Cahill and Craig Breslow.