A year after retiring, Andy Pettitte is back in pinstripes. The Yankees announced that they signed the 39-year-old left-hander to a minor league contract. Pettitte, a Hendricks Sports client, can potentially earn $2.5MM on the deal, which doesn't include incentives. 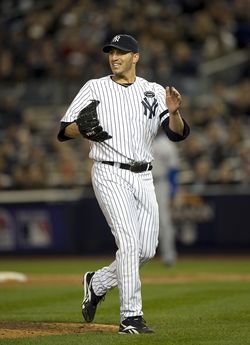 Pettitte announced his retirement from baseball after the 2010 season and did not play at all in 2011. He got the itch to return while with the team as a guest instructor earlier this month, ESPN's Buster Olney reports (on Twitter). The Yankees have left the door open for a return since Pettitte retired, so they were able to work a deal out once he decided to return.

It's unlikely that Pettitte will be able to start the season with the team. Joel Sherman of the New York Post says (on Twitter) that he will use the rest of Spring Training to get in shape, then rejoin the club. The Yankees currently have CC Sabathia, Michael Pineda, Hiroki Kuroda, Phil Hughes, Freddy Garcia, and Ivan Nova for five rotation spots, so Pettitte makes seven starters for five spots.