The Reds announced that they have agreed to extend second baseman Brandon Phillips through 2017. The ACES client will earn $72.5MM over the course of his new six-year contract, according to Jim Bowden of ESPN.com and MLB Network Radio. 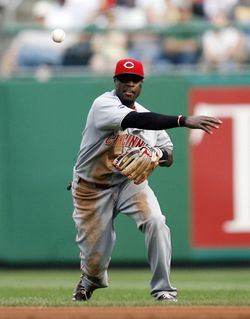 Phillips would have been eligible for free agency following the 2012 season if the Reds hadn't locked him up. Instead, he'll be in Cincinnati through his age-36 season.

This marks the second major commitment by Reds ownership in two weeks. Joey Votto agreed to terms on a ten-year, $225MM extension eight days ago.

The Expos selected Phillips in the second round of the 1999 draft and sent him to Cleveland along with Cliff Lee and Grady Sizemore for Bartolo Colon in 2002. Phillips didn't emerge as a star until the Indians traded him to Cincinnati four years later.

The Rangers agreed to a five-year, $75MM extension with second baseman Ian Kinsler last night. Both Kinsler and Phillips approached Chase Utley's record $85MM contract for second basemen without establishing a new record. That challenge falls to Robinson Cano of the Yankees.