The Orioles have acquired veteran slugger Jim Thome from the Phillies for Single-A prospects Kyle Simon and Gabriel Lino, both teams have announced. O's GM Dan Duquette told reporters (including Roch Kubatko of MASNSports.com) that the two sides had been talking for about a week before finalizing the trade on Saturday (Twitter link). 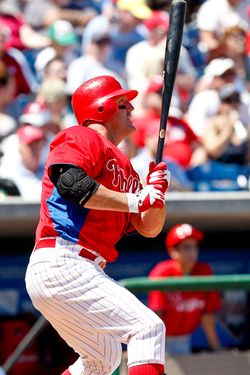 Phillies GM Ruben Amaro Jr. recently disclosed that he was open to moving Thome if there was a deal that made sense for both the slugger and the team. After his recent strong showing at designated hitter during interleague play, Thome was on board with joining an American League club in need of a bat. Philadelphia had been reportedly shopping him to teams in need of a DH and the O's fit the bill.

Thome, 41, is hitting .242/.338/.516 with five homers in 71 plate appearances this season. Most of that damage has come as the DH during interleague play, including a 6-for-13 showing during a three-game series in Camden Yards earlier this month. Thome missed more than a month with a back strain earlier this season.

Baltimore's designated hitters have hit a solid .258/.349/.439 this season, though they've rotated between Nick Johnson, Mark Reynolds, Chris Davis, and others. Johnson was recently placed on the DL with a wrist problem, so Thome gives them a replacement left-handed bat, one that should provide more power. The Orioles designated left-hander Zach Phillips for assignment in a corresponding move to free up a 40-man roster spot.

Simon, 21, was Baltimore's fourth round pick in last year's draft. The right-hander has pitched to a 3.96 ERA with 6.1 K/9 and 2.6 BB/9 in 14 starts and 72 2/3 innings down in A-ball this year. Baseball America ranked him as the Orioles' 18th best prospect before the season in their Prospect Handbook, saying Simon "should be an innings-eating starter." He was originally drafted by Joe Jordan, the Phillies farm director who was previously with the Orioles.

Lino, a 19-year-old backstop, is hitting .218/.282/.340 in 227 plate appearances down in Low Class-A this year. Baseball America ranked him as Baltimore's 21st best prospect before the season in their Prospect Handbook, noting that he offers power potential but is raw behind the plate.

Jim Salisbury of CSNPhilly.com first reported that the two sides were in talks while Ken Rosenthal of FOX Sports reported the trade agreement (on Twitter). Jon Heyman of CBSSports.com and Rosenthal later added details (Twitter links). Photo courtesy of US Presswire.