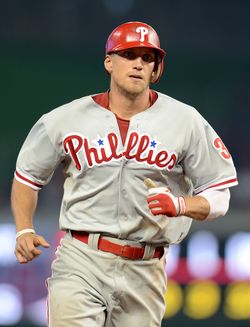 Pence, 29, is hitting .271/.336/.447 in 440 plate appearances for the Phillies this year.  He's under team control for 2013, though his salary could exceed $14MM.  He'll boost a Giants lineup that ranks 11th in the NL with four runs scored per game.  GM Brian Sabean snagged one of the best bats on the trade market last summer as well with Carlos Beltran, but Pence is more than a rental.

Pence joined the Phillies one year ago in a trade with the Astros, but amidst a disappointing season GM Ruben Amaro Jr. is cleaning house.  Less than an hour ago, the Dodgers acquired another member of the Phillies' outfield in Shane Victorino. Los Angeles also acquired Hanley Ramirez and Brandon League, creating pressure for their NL West rivals.