Free agent outfielder Nate Schierholtz has received an eighty-game suspension after testing positive for a banned performance-enhancing drug, the league announced today. He’ll serve the suspension if and when he joins a new organization.

Schierholtz, 32, spent the early portion of the season at Triple-A with the Tigers but was release in late May. He carried only a .246/.280/.356 batting line over 125 plate appearances at the point of his release, and he hasn’t found another organization since.

An eight-year major league veteran, Schierholtz hasn’t seen the big leagues since 2014, when he spent most of the year with the Cubs before a brief stint with the Nationals. He also made a quick stop with the Phillies, who acquired him from the Giants midway through his sixth year in San Francisco.

Over 2,275 career MLB plate appearances, Schierholtz owns a .253/.302/.405 batting line with 52 home runs. He also spent the 2015 season playing in Japan for the Hiroshima Carp, an experience that he shared this spring with MLBTR’s Zach Links 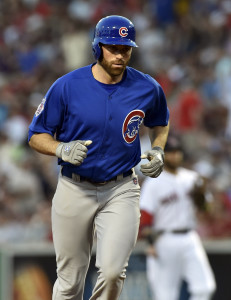 The Hiroshima Carp of Japan’s NPB have signed outfielder Nate Schierholtz to a one-year, $1.16MM contract, reports the Japan Times. Schierholtz is expected to join the team as soon as April 21. He opted out of his minor league contract with the Rangers on March 28.

Outfielder Nate Schierholtz has taken his release from the Rangers, Stefan Stevenson of the Fort Worth Star-Telegram tweets. The Rangers informed Schierholtz earlier today that he would not make the team. They signed him to a minor-league deal last month, with an opt-out date of today.

Schierholtz, 31, batted just .195/.243/.309 in 383 plate appearances with the Cubs and Nationals last season, then continued to struggle this spring. The left-handed Schierholtz has historically been a good weapon against right-handed pitching, but he didn’t separate himself from a variety of Rangers outfield options, also including Ryan Rua, Jake Smolinski, Carlos Peguero and Rule 5 pick Delino DeShields along with Shin-Soo Choo and Leonys Martin.

The Rangers have signed outfielder Nate Schierholtz to a minor league deal with a spring invite, executive VP of communications John Blake announced on Twitter. He will earn a $1.75MM salary if he makes the club, Evan Grant of the Dallas Morning News tweets.

Entering his age-31 season, Schierholtz is coming off of a rough 2014 in which he slashed .195/.243/.309 over 383 plate appearances with the Cubs and Nationals. He has generally produced at a much better clip, and averaged a .261/.314/.442 line in part-time action over the three previous seasons. A .231 BABIP likely contributed to he severity of the drop-off.

The left-handed hitter has traditionally been far more productive against right-handed pitching. He joins a lengthy list of candidates for a Texas outfield and bench bat role.

The Marlins have made a one-year, $2MM offer to Ichiro Suzuki, Barry Jackson of the Miami Herald reports. Miami is “optimistic, but not certain” that it will reach agreement with the veteran. If not, it could look to Nate Schierholtz or the trade market. Ichiro could be the next domino to fall now that Colby Rasmus has signed with the Astros.

Here’s the latest from the Orioles and the Nationals…

The Marlins have checked in on Ichiro Suzuki as a possible fourth outfield option, reports Clark Spencer of the Miami Herald (on Twitter). Additionally, Nate Schierholtz is also an option for the Marlins in their quest for a backup outfielder, reports MLB.com’s Joe Frisaro (also via Twitter).

Ichiro’s name has been most frequently connected to the Orioles in recent weeks, but his market has been otherwise limited. The 41-year-old batted .284/.324/.340 in 385 plate appearances for the Yankees last season. Ichiro is clearly no longer the player he once was, but both Ultimate Zone Rating and Defensive Runs Saved pegged him as an average defender in right field this season, and he’s still a skilled baserunner, as evidenced in part by his 15-for-18 mark in stolen bases. (Fangraphs valued his baserunning at +2.5 runs on the whole.)

Schierholtz, meanwhile, is coming off a dreadful season in which he batted just .195/.243/.309. Schierholtz’s strikeout rate did jump to 21.9 percent, but that figure isn’t so high that it can completely explain a 60-point dip in his batting average (especially considering the fact that he hit .251 with an 18.7 percent whiff rate a year prior). A portion of Schierholtz’s struggles does appear to be BABIP-driven, as his average on balls in play plummeted to .231 last season despite a career mark of .288. Perhaps not surprisingly, he was unable to sustain a stark increase in his homer-to-flyball rate from 2013 that led to a career-high 21 homers. He’s historically graded out as a solid right fielder and did so again in 2014.

As Frisaro notes, that Miami is looking at Schierholtz and Suzuki suggests that they’re prioritizing a left-handed bat in their search for extra outfielders. If that’s the case, then I’d speculate that free agents such as Andy Dirks, Endy Chavez and Tyler Colvin could also hold some interest in Miami’s eyes. The switch-hitting Eric Young Jr. would be another option as a bench player. As far as the trade market goes, Will Venable and David Murphy strike me as a pair of obvious trade candidates that come without exorbitant salaries.