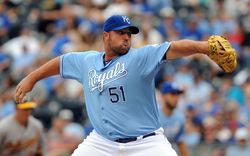 Broxton, 28, has bounced back this year to post a 2.27 ERA in 35 2/3 innings, although his peripheral stats aren't great with a 6.3 K/9 and 3.5 BB/9.  He has posted a career-best 56.6% groundball rate, a large part in why he's allowed just one home run.  Broxton is throwing 95 miles per hour again and has racked up 23 saves, though I'm guessing he'll join Sean Marshall in setting up Aroldis Chapman.  Broxton is on a one-year deal and has $1.4MM remaining in base salary.

Joseph, 24, has a 1.72 ERA, 11.7 K/9, 2.9 BB/9, and one home run allowed in 52 1/3 relief innings across Double and Triple-A this year.  Baseball America ranked him 27th among Reds prospects prior to the season, suggesting at the time he could become a power reliever in the bigs if able to improve his mechanics.

For the latest on all things related to winning the saves category in your fantasy league, check out CloserNews on Twitter.