The Cubs agreed to a one-year deal with outfielder Nate Schierholtz, the team announced. The deal is worth $2.25MM with $500K in incentives, according to ESPN's Jerry Crasnick, who first reported the agreement.  Schierholtz, 29 in February, was non-tendered by the Phillies last month.  He's represented by Lapa/Leventhal. 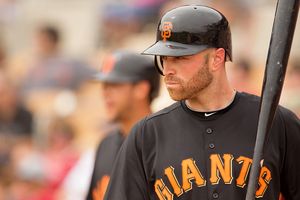 Schierholtz hit .257/.321/.407 in 269 plate appearances for the Giants and Phillies this year, playing mostly right field.  He could assume that position for the Cubs, as they could use David DeJesus in center field.  Schierholtz has less than five years of Major League service time, so the Cubs will have the opportunity to retain him for 2014 as an arbitration eligible player if he has a solid campaign.  He's generally regarded as a strong defender, and the Cubs are in a position to give him 500 big league plate appearances for the first time in his career.  He was popular at the Winter Meetings, generating interest from the Yankees, Rays, Red Sox, Orioles, and Mets, according to Crasnick.  Jon Heyman of CBS Sports says Schierholtz even turned down a two-year offer in the $5MM range.