The Cubs have officially signed Edwin Jackson, the team announced. It's a four-year contract worth $52MM, and it does not include a no-trade clause. Jackson is a Legacy Sports Group client. 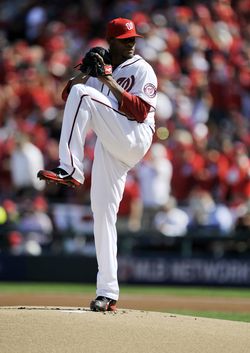 The Cubs have worked exceptionally aggressively to add free agent starting pitching this offseason. They already signed Scott Feldman, Scott Baker and Carlos Villanueva to join a rotation led by Matt Garza and Jeff Samardzija. Travis Wood also has considerable experience starting, but he might now project as a reliever.

None of the Cubs' additions will cost the team a future draft pick. The Nationals declined to make Jackson a qualifying offer after the season, which means he wasn’t linked to draft pick compensation. As MLBTR's Transaction Tracker shows, Jackson's deal represents the largest free agent contract the Cubs have agreed to under GM Jed Hoyer.

Jackson joined Legacy Sports in July, leaving the Boras Corporation. Last winter Jackson obtained a one-year, $11MM contract to play in Washington. One year later, the Indians, Rangers and Padres were among the teams with interest in Jackson.