The Rays have officially signed David Price to a one-year contract, the team announced. The deal is worth $10.1125MM and allows the two sides to avoid arbitration. The reigning AL Cy Young Award winner is a Bo McKinnis client. 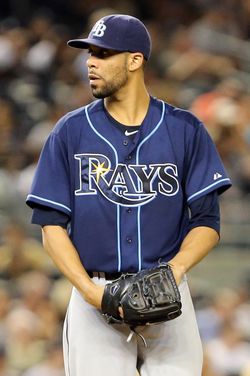 Price, 27, earned $4.35MM last season and was projected to earn $9.5MM in 2013 according to Matt Swartz's arbitration model, which was developed exclusively for MLBTR. The $10.1125MM salary is a new record for a second-time eligible pitcher, soaring past the $7.37MM earned by Jered Weaver in 2011. Price will be arbitration-eligible a total of four times as a Super Two, and he is scheduled to hit free agency after the 2015 season.

At $10.1125MM, Price also becomes the highest paid player in Rays' history, surpassing the $10MM earned by Carl Crawford in 2010. James Shields briefly held that record before he and his $10.25MM salary for 2013 were traded to the Royals a few weeks ago.

The Rays still have four unsigned arbitration-eligible players, as our Arbitration Tracker shows: Sam Fuld, Matt Joyce, Jeff Niemann, and Ryan Roberts. Tampa is one of baseball's "file and trail" teams, meaning if the two sides are unable to reach an agreement before the deadline to exchange salary figures (January 18th), the Rays cut off talks and go to a hearing. The team is 6-0 all-time in arbitration hearings and 5-0 under Andrew Friedman.