The Cardinals have signed first round pick Marco Gonzales, according to Jim Callis of Baseball America (via Twitter). 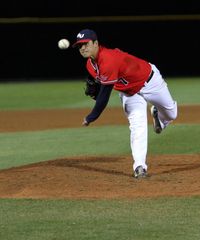 The Gonzaga product is the most polished arm in the draft and boasts the best changeup of any pitcher in this year's class, in Callis' estimation.  Gonzales, who is advised by Randy Rowley of Rowley Sports Management, is a polished hurler but doesn't have a terribly high ceiling, according to BA.  There's no question that his changeup is his best attribute, and it grades as a 70 pitch on the 20-80 scale.

Gonzales ranked No. 28 on BA's top 500, 23rd on Keith Law of ESPN's top 100, and No. 14 on Jonathan Mayo of MLB.com's top 100.  Remarkably, Gonzales is also the first left-handed pitcher to be selected by the Cardinals in the first round since Wake Forest southpaw Bret Wagner all the way back in 1994.  St. Louis doubled up on lefties with their pair of first-round picks, selecting high school hurler Rob Kaminsky at No. 28 overall.  Gonzales is the fourth first-round pick to sign so far.