5:21pm: Ken Rosenthal of FOX Sports tweets that the two sides will negotiate the player/cash combination going from the Rays to the White Sox over the next several weeks. Rosenthal also tweets that the return is not contingent on how much Crain pitches. Marc Topkin of the Tampa Bay Times tweets that the compensation is likely to be finalized after the season. Scott Merkin of MLB.com adds that the pool of players from which the White Sox can choose has been agreed upon.

4:40pm: The Rays have become the third playoff contender to add a significant piece to their bullpen today, as the team has announced the acquisition of Jesse Crain from the White Sox in exchange for player(s) to be named later or cash considerations. Chicago's return in this deal will reportedly be dependent on Crain's health down the stretch for the Rays. Brandon Gomes has been shifted to the 60-day disabled list to create a 40-man roster spot for Crain. Reports from earlier today stated the ball was in Chicago's court to trade their ace setup man to one of two teams, with the Rays being the favorites. 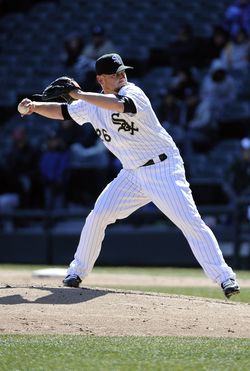 The White Sox have also announced the trade, and general manager Rick Hahn issued the following kind words about his former right-hander:

“We cannot say enough about what Jesse has meant to our bullpen, and the positive impact he’s had on our young relievers. "We certainly think he has the ability to influence this year’s pennant race very positively for the Rays.”

The 32-year-old Crain is in the midst of one of the finest seasons for a relief pitcher in recent history. In 36 2/3 innings prior to his shoulder injury, the Toronto native had allowed just three earned runs (0.74 ERA) with 11.3 K/9 and 2.7 BB/9. He has not surrendered a home run this season despite pitching in the cozy confines of U.S. Cellular Field in Chicago. Crain was placed on the disabled list with a right shoulder strain on July 3.

Crain is in the final season of a three-year, $13MM contract that he signed with the White Sox prior to the 2011 season. His trade to the AL East will bring him out of the only division he's ever known, as he spent the first seven seasons of his career with the Twins after Minnesota selected him in the second round of the 2002 draft. Because he is a free agent at season's end, Crain is strictly a rental and cannot net the Rays a compensatory draft pick in 2014.

Earlier today the Tigers fortified their bullpen by acquiring Jose Veras from the Astros, and the Braves acquired Scott Downs from the Angels.

ESPN's Buster Olney was the first to tweet that a deal had been struck. Joel Sherman of the New York Post added that the White Sox would receive "future considerations" for Crain, depending on his health (Twitter links). Jon Heyman of CBS Sports tweeted that the Rays would send players to be named later or cash to the Rays.