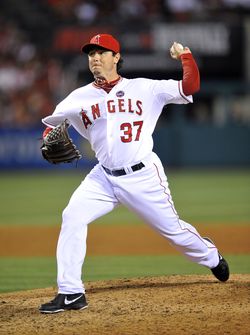 Downs, 37, has a 1.84 ERA, 6.8 K/9, 3.4 BB/9, 0.31 HR/9, and 63.1% groundball rate in 29 1/3 innings this year.  The 12-year veteran has split his time fairly evenly against righties and lefties, but has been quite good in facing left-handed hitters 55 times this year.  Prior to the 2011 season, Downs signed a three-year, $15MM free agent deal with the Angels.  The first-place Braves were known to be in the hunt for a lefty reliever after losing Eric O'Flaherty and Jonny Venters for the season, with the Cubs' James Russell high on their wish list along with Downs.  Luis Avilan had been the team's lone southpaw reliever.  Downs has yet to pitch in the postseason in his career, notes Jeff Fletcher of the Orange County Register.

Another first-place team added a reliever earlier this morning, as the Tigers acquired Jose Veras from the Astros.