WEDNESDAY, 10:08pm: Smith's salary will be spread in even, $5.25MM annual increments across the life of the deal, tweets Jeff Fletcher of the Orange County Register. Smith can earn an additonal $250k annually based on games finished, which essentialy means he'd see a bump if he lands in the closer role.

WEDNESDAY, 6:42pm: The Angels confirmed the signing via press release.

SUNDAY, 9:02am: Smith's deal is worth $15.75MM over three years, according to Tim Brown of Yahoo Sports (on Twitter).

SATURDAY, 8:44pm: The Angels are to sign reliever Joe Smith to a three-year deal, Jon Heyman of CBS Sports tweets. The size of the deal is slightly more than $15MM, Heyman adds in a second tweet. 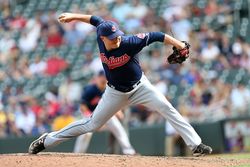 Smith, 29, has been with the Indians since 2009 and is a seven-year major league veteran. The righty has a lifetime 2.97 ERA and turned in a 2.29-ERA, 63-inning campaign in 2013. Angels GM Jerry Dipoto had previously indicated that Ernesto Frieri will return as the club's closer in 2014, so Smith is likely to land in a seventh- or eighth-inning role for the Halos.

The right-hander was widely regarded as one of the best setup men available this winter.  Smith drew a good amount of interest from clubs in need of a bullpen boost, including the Phillies and Rockies.  There was mutual interest between the Indians and Smith in a return, but ultimately Smith wanted more years than the Tribe was willing to offer.

Smith must complete a physical next week before the deal becomes official, according to Jeff Fletcher of the Orange County Register (Twitter link).  The reliever is represented by Meister Sports Management, according to the MLBTR Agency Database.