It didn't take long for the Yankees to move on from losing Robinson Cano.  The Yankees have officially announced the signing of Carlos Beltran to a three-year deal.  The contract is reportedly worth $45MM and will pay Beltran an even $15MM per season as well as provide him with a no-trade clause.  Beltran is represented by agent Dan Lozano of the MVP Sports Group.

Beltran had a three-year, $48MM offer in hand from the Diamondbacks, as Nick Piecoro of the Arizona Republic reports that the Snakes made Beltran a three-year offer for more than $45MM.  Though the Yankees were a bit reluctant to give Beltran that third year, he was known to be a top target for the Bombers this offseason.  Beltran was himself keen on coming to the Bronx and is now finally wearing the pinstripes after showing similar interest in his two previous trips to free agency. 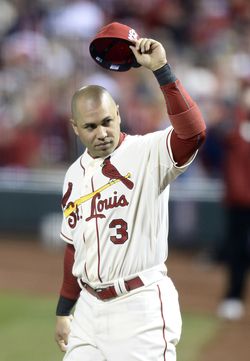 Beltran hit .296/.339/.491 with 24 homers in 600 PA with St. Louis last season, and though he turns 37 in April, Beltran has thus far kept swinging a big bat deep into the late stages of his career.  He'll no doubt see some DH at-bats in New York but he'll spend most of his time in right field while the more defensively-challenged Alfonso Soriano will be the Yankees' primary DH, USA Today's Bob Nightengale reports.

The D'Backs were just one of several teams were linked to Beltran this offseason, with the Royals also pushing hard to reunite with the veteran slugger.  This strong market pushed Beltran's price tag to a third year, topping the two-year, $30MM deal that MLBTR's Steve Adams predicted in Beltran's Free Agent Profile.  One team that wasn't in the mix was Beltran's most recent club, the Cardinals, who look to go forward with younger options like star prospect Oscar Taveras in the outfield next season.

Since Beltran rejected the Cards' one-year qualifying offer, St. Louis will receive a compensation pick between the first and second rounds of the 2014 amateur draft.  The Yankees already lost their first round pick for signing Brian McCann, and in signing Beltran and Jacoby Ellsbury, New York has also given up its own two compensation picks for Cano and Curtis Granderson.

The Yankees have thus far spent a whopping $311MM for the services of five players (Beltran, Ellsbury, McCann and the re-signed Hiroki Kuroda and Derek Jeter) this offseason.  More spending could be on the way for the Bombers if they need a third baseman to replace a suspended Alex Rodriguez, if they want to upgrade beyond Kelly Johnson as Cano's replacement at second base, and once they make their long-rumored bid on Masahiro Tanaka once his posting situation is resolved.